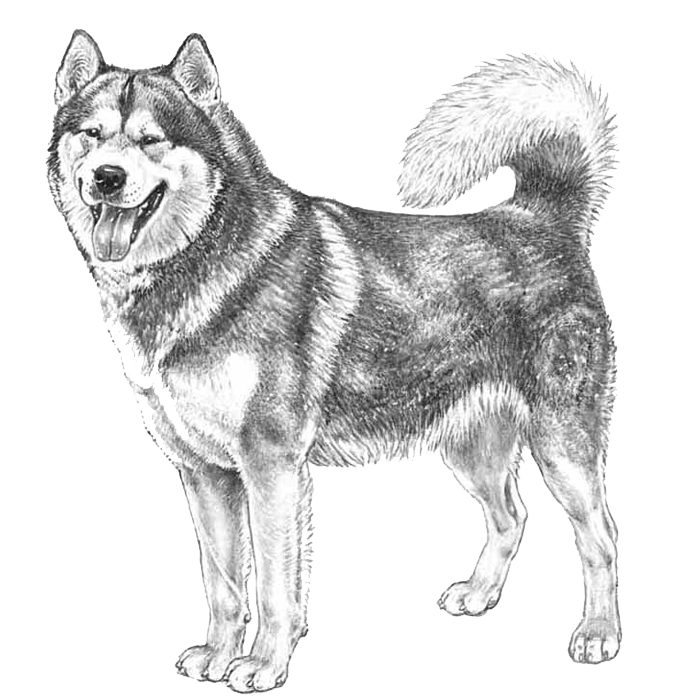 The Alaskan Malamute is a large, fluffy spitz breed recognized as being one of the most ancient breeds of dogs. The forebears to the modern Malamute crossed the Bering Strait with their owners over 4,000 years ago. Their size, thick coat, and work drive make them ideal dogs for pulling sleds, but they also make amicable companions.

The Alaskan Malamute occasionally comes in a long-haired “woolly” variety due to a recessive gene that causes a longer coat.

The Alaskan Malamute has a long and interesting history. Genetic analysis has shown that they’re one of the most ancient breeds, having diverged from a population of working sled dogs that crossed into Alaska via the Bering Strait over 4,000 years ago. Along with breeds like the Xoloitzcuintli, this makes them one of the oldest dog breeds from the Americas. As a more primitive breed, Malamutes tend to have higher Embark “wolfiness” scores, which indicates that they have more ancient genetic variants in their genome than most other breeds — a holdover from historical interbreeding between working sled dogs and wolves (though the modern Malamute does not have recent wolf ancestry). The Malamute is still sometimes used as a working dog today, but they’ve also endeared themselves to pet owners with their intelligence, beautiful coats, and occasional mischief.

Though most think of Alaskan Malamutes as having gray, wolf-colored coats, they come in a variety of shades and colors including wolf sable, red, white, and black. They may have white markings such as a white blaze and points. Although the breed standard dictates a shorter coat, the occasional long-haired Malamute can pop up due to a recessive mutation. Malamutes should have a double coat which helps insulate them even in the coldest climates. As anyone with a Malamute can attest, they shed seasonally and considerably. The breed can vary in size, but most Malamutes weigh in at around 75-85 pounds.

While Malamutes are affectionate and playful dogs, they also carry an air of dignity. The ability to work is emphasized first and foremost in their breed standard, which means that even Malamutes who don’t pull sleds still need vigorous exercise. If not given enough exercise, Malamutes often make their own fun which may include destructive chewing, howling, and other activities owners may not find amusing. An active Malamute is a happy Malamute, and a wonderful family companion.