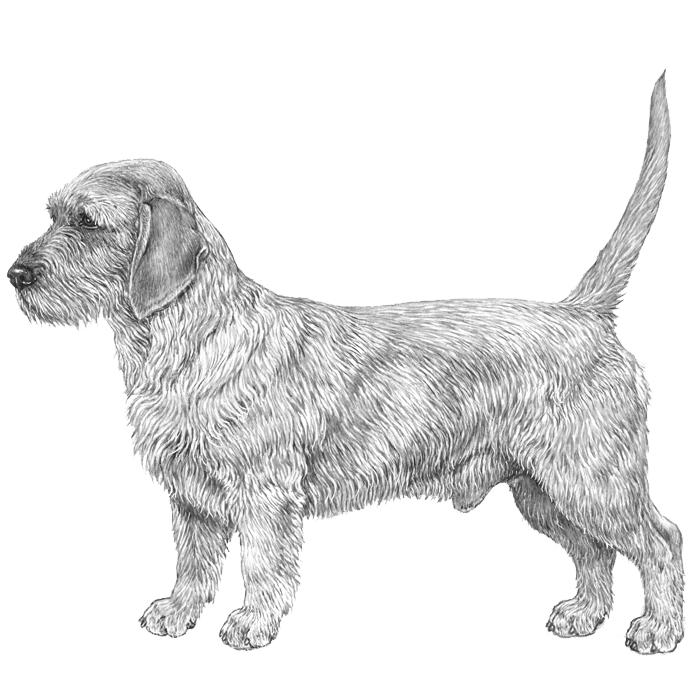 Basset Fauve de Bretagnes are a small breed of French hound, originally from the Brittany region of north-west France.

Some people say that the Basset Fauve de Bretagne nearly went extinct during WWII, and that people would breed fake Basset Fauves by mixing Dachshunds and Petit Basset Griffon Vendéens. The French, of course, insist that this never happened and that the breed was never really in danger.

Bonjour! Basset Fauve de Bretagnes are a small breed of French hound, originally from the Brittany region of north-west France. They first came about in the 1800s, and have never really become popular outside of their native France. Don’t let their cute appearance fool you (and Basset Fauve de Bretagnes are really, really cute)– they are formidable little hounds who are well suited to their role as hunting dogs. They were initially used for hunting rabbits, but have turned out to be multitalented little dogs and have excelled in hunting larger animals as well as unrelated sports such as agility, nose-work, and obedience trials.

They were created from the now extinct and significantly larger Grand Fauve de Bretagne, and while still used as a hunting dog in France, they are primarily kept as pets in other countries. And they make absolutely lovely pets; the Basset Fauve de Bretagne is a friendly, intelligent, and lovely companion who truly loves children and other dogs. They are not known for being especially obedient (typical hounds!) but with early and proper socialization and obedience training, they can become perfectly well-behaved pets.

Speaking of training, Basset Fauve de Bretagnes are often stubborn and have a tendency to “follow their noses”, which means that once they catch a tasty scent, they are liable to follow it no matter how many times you call them back to you. Because of this, they should never be let off leash unless they are in a secure, fenced in place. They will never be truly reliable when you ask them to come back to you, so keep that in mind at places like the dog park, outdoor recreation areas, etc.

Basset Fauve de Bretagnes are known for their soulful eyes and expressions and are reputed to show emotions on their faces almost like a human being would. Despite their origins as hunting dogs, these soulful little dogs can make good apartment pets as long as they are given adequate exercise. They are equally suited to suburban and rural living. Because they are hunting dogs, you might want to be careful if you have smaller animals in the home (cats, rabbits, hamsters) as the Basset Fauve de Bretagne might have trouble differentiating between friend and prey. As long as they are introduced to cats as puppies, they should do fine. Basset Fauve de Bretagnes might be difficult to find in the United States, but don’t let that deter you! They make exceptional family pets and are lovely little dogs.