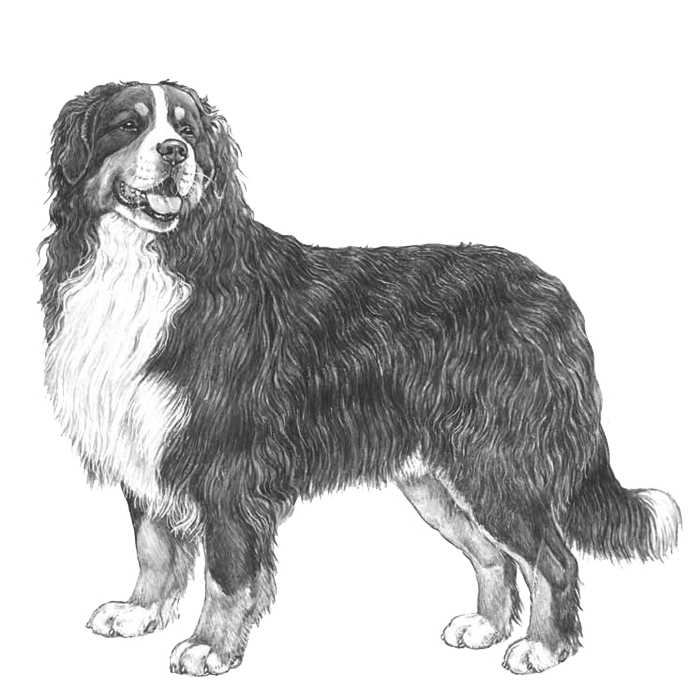 The Bernese Mountain Dog, commonly referred to as a ‘Berner’, is a versatile working dog that is both visually pleasing and a loyal companion. The Bernese Mountain Dog was bred to herd cattle, pull carts and be a watchdog in the Swiss farmlands. The ancient ‘Molosser’ breed is considered the main contributor to Mastiff-type dogs, which include the Berner. It is likely that the Molosser bred with farm dogs from the Swiss Alps in the first century B.C., developing a number of Swiss Sennenhund (“mountain dog”) breeds, including the Berner Sennenhund. It is thought that the Berner continued working on these Swiss farmlands for over 2,000 years, before their primary purpose switched from herding cattle to appearing as a show dog in the early 20th century. They were first classified as the Bernese Mountain Dog at this time by the Swiss Kennel Club. Following World War I, in which the breed nearly became extinct, Berners were exported to America before being accepted by the AKC as an official breed in 1937. Breed development faltered somewhat during World War II before Berners became an established and popular breed in the mid to late 20th century.

This easygoing breed likes to be around their owners, where their calm and intelligent nature makes them a beloved family dog. Berners exhibit their working dog instincts in their willingness to learn and relative ease to be trained. Their heritage also often results in being protective and sometimes shy towards new people and dogs. Early socialization training allows the Bernese Mountain Dog to learn to overcome initial caution around new things. This breed is a large dog, weighing around 100 pounds, and likes to keep busy, so it is important training is conducted while young and manageable. While they are well-tempered dogs, they are slow to mature and often exhibit puppy behavior for a number of years before reaching full maturity. Due to their beautiful and thick double coat, Berners tend to shed generously, requiring frequent brushing to keep under control. Unfortunately, owing to their size and limited gene pool, Bernese Mountain Dogs are prone to health problems and have a life expectancy of between 6-8 years. Nonetheless, this lovable dog carries many attractive traits that see Berners rank as the 29th most popular breed.