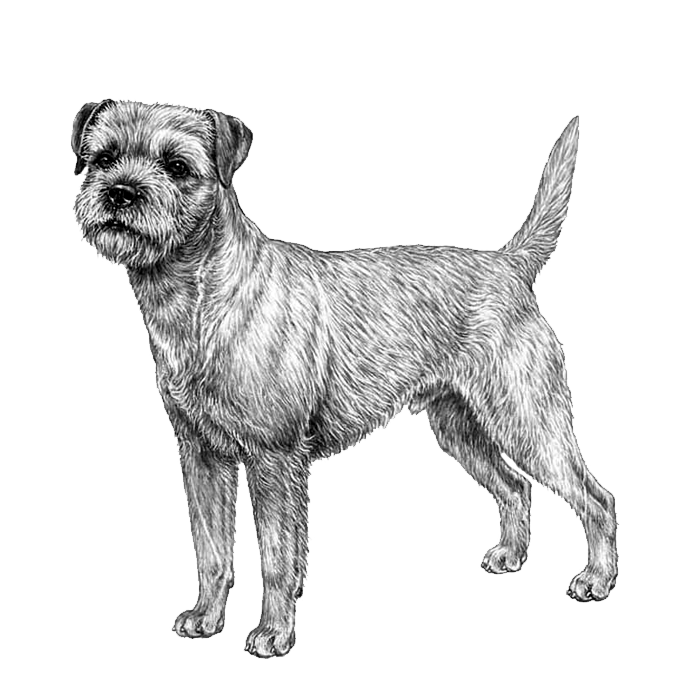 The Border Terrier is a feisty terrier breed that was originally bred for assisting with foxhunts by flushing foxes out of their hiding places. Today, they’re primarily companions with a lot of personality. Though they come in a small package, Border Terriers have the drive and energy to dig, hunt, and play.

The Border Terrier has a compact head that is often described as rembling the head of an otter.

Like other terrier breeds, Border Terriers were bred to work low to the ground, flushing foxes from the dens they hide in. In fact, the word “terrier” comes from the Latin word for “earth,” which is “terra”. The “border” part of this breed’s name is owed to them originating near the Scottish-English border. Because of the highly specialized work Border terriers were bred for, they have long enough legs to keep up with their owners on horseback, but are still short enough that they can be agile and fit into small spaces. Their rough, furnished coat gives them a degree of weatherproofing so they could work outside, rain or shine. Today, Border Terriers are mostly a companion breed, though they retain the feisty personality of their energetic, working forbears.

Border Terriers have the classic wiry terrier coat that sheds minimally. It actually has two layers: a harsh top layer and soft undercoat. This combination repels dirt, which is a good thing because Border Terriers love being outside and poking their nose into holes (sometimes of their own creation). Border Terriers come in red, grizzle and tan, blue and tan, and wheaten. They often have a black muzzle (sometimes called a “melanistic mask” in genetic terms). Their expressive eyes are said to be “full of fire and intelligence” — appropriate for a terrier!

For those familiar with other terrier breeds and their dynamic personalities, it should come as no surprise that Border Terriers can be feisty. Though they make wonderful companions and great family pets, they can also keep their people on their toes and have a mischievous streak. Some Border Terriers may be prone to digging holes and barking, though they tend to be a little more mild-mannered than most terrier breeds. They’re highly affectionate and good-natured dogs.