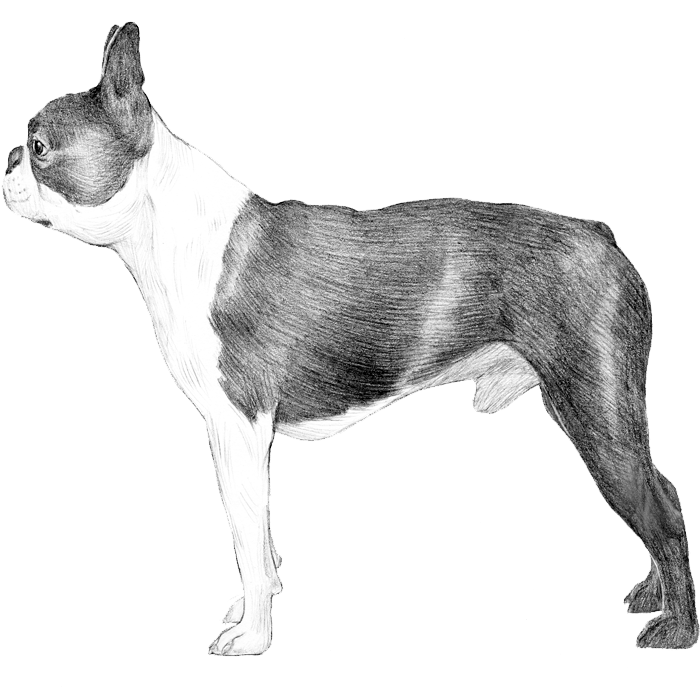 Boston Terriers are lively, intelligent and friendly. Although a small dog, they are strong and sturdy.

The Boston Terrier carries the nickname “The American Gentleman”, due to their characteristically gentle nature and dapper looks.

Boston Terriers at a glance

With irresistibly cute faces and spunky personalities, the Boston Terrier is an enjoyable and lively dog breed. The Boston Terrier is a compactly built, short-backed, clean-cut dog that’s considered relatively easy to train and well-adapted to home living. They are great family dogs that enjoy socializing with people and kids, while also being gentle and quiet. They are well-mannered and obedient. However, they can be territorial of their owners, which can spark aggressive behavior towards other pets and strangers.

If you are considering adopting a Boston Terrier, have a dog that’s part Boston Terrier, or just want to know more about this breed, we’ve compiled all the information you might need to make informed decisions regarding their care. We’ve included details about this breed’s physical characteristics, activity needs, grooming tips, and nutrition. You’ll also find information about the genetic health risks Embark can test for that could impact this breed.

The Boston Terrier was originally bred as a fighting dog in the late 19th century but is now considered an affectionate family pet. The exact account of how this breed came to be is unknown. However, it is believed a Bostonian imported a bulldog/English terrier cross named Judge from England and from him, developed the Boston Terrier.

These dogs can really hold their own in the highly competitive world of canine sports. Their innate desire to please people is a big part of the breed’s ability to quickly learn and excel in a variety of performance events.

Physical characteristics of this breed

According to the American Kennel Club (AKC), these dogs are recognized by their tight tuxedo jacket, sporty but compact body, the friendly glow in their big, round eyes, and impeccable manners. Due to their short noses and inability to both cool and heat air, Boston Terriers struggle to adapt to the outside temperature and should generally be kept indoors. Their short noses also lead to plenty of snorting, drooling, and snoring. The Boston Terrier is prone to flatulence so be prepared for some unpleasant smells around these big-eared canines.

If you own this kind of dog, you will most likely find a circle of dark hair on top of your dog’s head; this is known as a “Haggerty dot” or a spot or star, depending on who you ask. Dogs with this special marking are descendants of one of the original lines of Boston Terriers owned by the Haggerty family in the early 1900s.

Playtime with the Boston Terrier

Each Boston Terrier has different needs when it comes to exercise. The AKC recommends a brisk walk once or twice a day for some. Others will need more time to run and play every day and let off steam. Simply letting your doggo out into the backyard doesn’t count as exercise — he’ll probably just sit at the door waiting to be let back in. Left alone for long periods of time, a Boston Terrier will tend to become frustrated and develop undesirable behaviors. Don’t forget to consult your vet about your dog’s specific exercise needs.

Nutrition for your Boston Terrier

A balanced diet is vital to your pup’s growth and health. According to the AKC, the Boston Terrier should do well on a diet of high-quality dog food, whether commercially manufactured or home-prepared with your veterinarian’s supervision and approval. Any diet should be appropriate to the dog’s age. Some dogs are prone to becoming overweight, so watch their calorie consumption and weight level. Treats can be an important aid in training, but giving too many can cause obesity. If you’re unsure about what to feed your dog, talk to your veterinarian about a meal plan.

The Boston Terrier has a sleek coat that does shed, but infrequently. Because of this, the AKC proposes that you brush your Boston Terrier weekly with a soft-bristle brush or rubber grooming tool. These pups need to be bathed occasionally and their nails should be trimmed regularly. It’s also important to keep their teeth and ears clean!

Health and aging for this breed

The Boston Terrier has a lifespan of about 13-15 years. According to VetStreet.com, your Boston Terrier is considered a senior pup after turning 8. Boston Terriers are among the flat-faced, or brachycephalic, dog breeds, and that flat face can bring health problems, some minor such as snoring and snuffling, while some issues are more major. Speak with your vet about proper care for your pup’s snout.

Do you own a Boston Terrier or do you think your dog might be part Boston Terrier? Learn more about you pup with Embark’s Dog DNA Tests, the most accurate on the market.