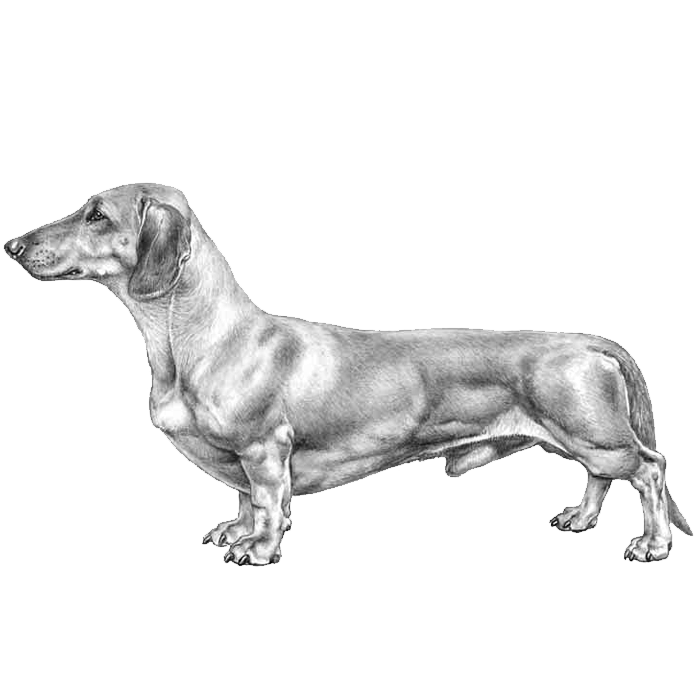 The Dachshund, meaning “badger dog” in German, is a lively breed with a friendly personality and a great sense of smell. Known for their long and low bodies, they are spirited hunters that excel in both above and below-ground work. They come in three different coat varieties (smooth, wirehaired or longhaired) and can be miniature or standard size.

The name Dachshund is derived from “Dachs Krieger” meaning “Badger Warrior”, who knew your Dachshund has such a fearsome name!

Dachshunds at a glance

The Dachshund dog breed is known for its curious personality and innate cleverness. Many of the Dachshund’s observable traits can be traced to their history as hunting companions. Dachshunds are scent hounds who were bred to hunt badgers and other tunneling animals, such as rabbits and foxes. These pups have maintained quite a bit of their bravery and bark! Having this dog in your life will surely lead to many years of happiness, amusement, and joy.

If you’re considering adopting a Dachshund, look no further! We have all the information you need to make informed decisions regarding their care. We’ve included details about this breed’s physical characteristics, playtime needs, health, nutrition, and more. At the bottom of this guide, you will find a comprehensive list of all the health conditions we test for here at Embark.

According to the American Kennel Club, Dachshund is a German word meaning “badger dog” and, as the breed name suggests, they were developed to enthusiastically dig their way into a badger den and dispatch its occupant. The breed was refined by German Foresters to have an elongated shape that is advantageous for fitting into tight animal burrows. Dachshunds are often viewed as a symbol for Germany. For example, a Dachshund named Waldi was the first official mascot of the 1972 Summer Olympics held in Munich. Dachshunds are one of the most popular breeds in the United States.

Today, leverness, courage, perseverance, and strength are considered hallmarks of this breed. Admitted to the AKC Stud Book in 1885, their popularity in America was immediate and enduring.

Dachshunds are bred with three coat varieties: smooth, long, and wire-haired, according to the AKC. They are shown in two sizes: standard and miniature. Low to ground, long in body and short of leg, with robust muscular development, the Dachshund has a keen nose and powerful bark. These pups can possess a myriad of colors and markings.

Dachshunds are prone to obesity, and the AKC recommends that this breed not be allowed to become overweight. This is not only because of general health reasons, but also to avoid strain to the dog’s long back, which can lead to slipped or ruptured (herniated) discs. If you have any questions or concerns about your dog’s diet or weight, talk to your vet about the right portion size, feeding schedule, and appropriate foods for your Dachshund.

Despite their shape and size, Dachshunds are a very athletic breed. Most Dachshunds enjoy vigorous indoor games. While this might be enough to wear them out, their working dog minds will benefit from the mental stimulation of regular, moderate-length outdoor walks and sniffs. Remember, this kind of dog was bred to dig. It’s important to keep your Dachshund well-exercised indoors, or they might turn those paws on your potted plants, couch, or carpets. However, to avoid injury, take care to limit your Dachshund running up and down tall flights of stairs, or jumping on and off furniture.

Regular brushing and nail trimming will benefit all Dachshunds, regardless of coat type. The AKC recommends two walks every day of moderate length. Because they are very social, this breed doesn’t do well to spend an excessive amount of time outdoors in a yard or fenced-in area — they want to be with their humans.

According to Animal Planet, the Standard Dachshund can grow to between 11-32 pounds while the Miniature Dachshund usually stays under 11 pounds. Both types live an average of 12-16 years. Chewy.com cautions that this breed has the potential to experience both environmental and genetic problems common to long-bodied dogs. Jumping, excessive stair-climbing, and other high-impact activities usually result in serious diseases and conditions of the vertebrae. These dogs are also susceptible to the normal diseases that affect most aging dogs of all breeds, including changes to vision, health, hearing, sleep, and activity.

Getting your pup tested with Embark will arm you with as much information as possible to ensure your dog is healthy while potentially avoiding preventable diseases.

An Embark Dog DNA Test looks at the following health conditions in Dachshunds:

Do you own a Dachshund or do you think your dog might be part Dachshund? Learn more about your dog with Embark’s Dog DNA Tests, the most accurate on the market.