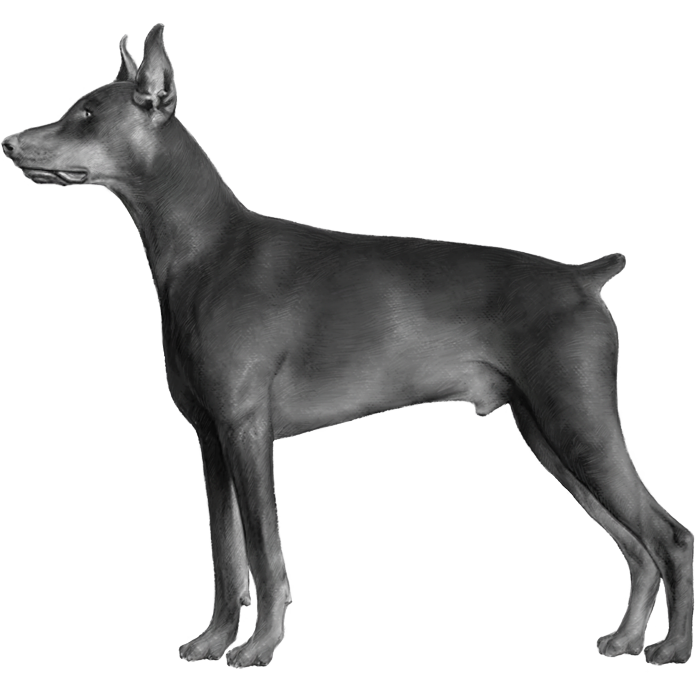 Doberman Pinschers are a strong and athletic breed that are built to guard and protect.

A Doberman named Cappy saved the lives of 250 U.S. Marines on Guam in 1944 by alerting them when Japanese troops were nearby.

Doberman Pinschers at a glance

As a dog breed, Doberman Pinschers are considered intelligent, loyal, and make for perfect companions as well as guard dogs. The Doberman is a mixture of many different dog breeds that includes Beauceron, German Pinscher, German Shepherd, and Rottweiler. This is a very athletic dog breed that often excels in agility courses. Because of their large build and abundant energy, your Doberman will require plenty of attention, leadership, and activity. You might want to take this into account when considering adding a Doberman to your family.

If you’re considering adopting a Doberman Pinscher or have one in your family, look no further than this guide! We have everything you need to make important decisions about their care, including basic information about this breed, grooming tips, nutrition advice, and much more. At the end of this article, you’ll find a list of genetic health risks Embark tests for that are relevant to this breed.

The Doberman Pinscher is a relatively new breed, bred around 1890 by Karl Friedrich Louis Doberman, a German tax collector. He aimed to breed a dog that would protect him during his tax collections. The breed quickly gained an international reputation as a working dog supreme. The Doberman Pinscher has excelled at police and military K-9 duty, as well as therapy dogs and service dogs for the disabled. A Doberman Pinscher named Storm won Westminster’s Best in Show 2 years running, in 1952 and 1953.

Embark has proudly partnered with the Doberman Diversity Project to provide high-resolution genetic data and analysis for every dog enrolled. Embark’s mission to end preventable disease in dogs aligns with that of the DDP — to reduce the incidence of heritable diseases by addressing the depression in the overall genetic diversity of the Doberman breed. Embark’s genetic testing will be a key ingredient in achieving this goal, as we aim to test 1,000 Dobermans in an effort to identify specific areas of the Doberman genome that are associated with a breed-specific disease.

The Doberman Pinscher is a powerfully built breed. According to PetMD.com, male Dobermans range from 26 to 29 inches and weigh between 70 to 75 pounds. Female Dobermans are usually 24 to 26 inches and weigh between 60 to 65 pounds. The AKC notes that these pups have a smooth, short coat with colors black, red, blue, and fawn. They have rust-colored markings found above each eye, on the muzzle, throat, chest, tail, and legs.

Because of their high activity level, Dobermans require an excellent quality diet. Your veterinarian may suggest a specific diet or supplement in the case of specific disease-related concerns. Petcarerx also recommends Doberman Pinschers eat food that is easily digestible.

An important ingredient might be a meat source such as chicken, beef, or lamb, followed by whole grains such as brown rice or sweet potatoes. You might decide to look for a commercial diet approved by the Association of American Feed Control Officials, an organization that ensures the food is nutritionally balanced. Talk to your vet about the right portion size, feeding schedule, and appropriate foods for your Doberman Pinscher.

Your Doberman Pinscher will require a lot of exercise. Chewy.com recommends activities that will challenge their brilliant minds. They’re designated by the AKC as a Working Breed, which means they constantly need jobs to do.

Consistent training and socialization is very important for this breed, from puppyhood through adult life. As when training any dog, Doberman or otherwise, use positive reinforcement — treats and praise to reward good behavior — rather than harsh correction.

The Doberman Pinscher’s short, dense, hard coat requires minimal grooming. However, regular grooming facilitates a healthy, shiny coat.  Grooming should include a toenail trim, checking ears and mouth for abnormalities or foul odors, and the requisite check for abnormal lumps, bumps, or sores.

Health and aging for the Doberman Pinscher

Do you own a Doberman Pinscher or do you think your dog might be part Doberman? Learn more about your dog with Embark’s Dog DNA Tests, the most accurate on the market.