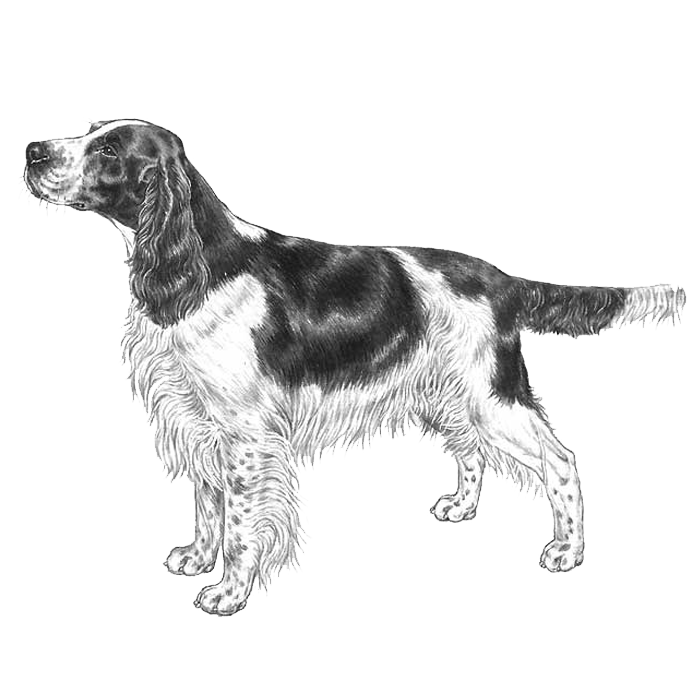 English Springer Spaniels are an energetic and loyal companion dog, bred for hunting but also popular among families.

English Springer Spaniels are used as sniffer dogs, using their strong sense of smell to identify arms and explosives in war zones.

The English Springer Spaniel was bred as a gun dog due to their strong flushing ability in the field, but today is also considered a companion dog. Spaniel-type dogs trace back many centuries to which their exact date of origin is unknown. It is thought that they originated in Spain and made their way to England and beyond via trading ships. They are mentioned in Welsh Law as early as 300 A.D.! Up until the early 20th century in England, Cocker Spaniels and Springer Spaniels were born in the same litter, and classified by their hunting ability rather than their exact breed. Springers were the larger dogs in the litter, before being first classified a separate breed in 1902 by the English Kennel Club, followed by the American Kennel Club in 1910. Around this time, English Springer Spaniels were bred to both perform in field trials while also appearing in conformation shows. This changed in the 1940s, when field enthusiasts began developing dogs that would excel in the field, while show enthusiasts bred separate dogs specifically for their show ring abilities. This breeding division applied to the English Springer Spaniel and still exists today.

While having natural hunting instincts, the English Springer Spaniel is also a common family pet. They are both enthusiastic and high energy, matched by their eagerness to please and socialize with people. They are easily trainable as a result of their intelligence and willingness to learn. This is a very loving and loyal breed that desires human interaction, so it is important that they are not left in isolation for long periods of time. They also require a lot of exercise to satisfy their energy needs, which should be fulfilled to avoid them becoming destructive. It should also be noted that their hunting nature can become apparent when exercising, so try let them run in enclosed areas or on a leash. The English Springer Spaniel is a medium-sized, compact dog that possesses a double coat that is generally black with smaller white markings or vice versa. However, English Springer Spaniels bred for conformation shows will have longer, fuller looking coats than those bred for the field. Brushing around three times a week should maintain a full looking coat. This floppy-eared breed ranks as the 27th most popular breed.