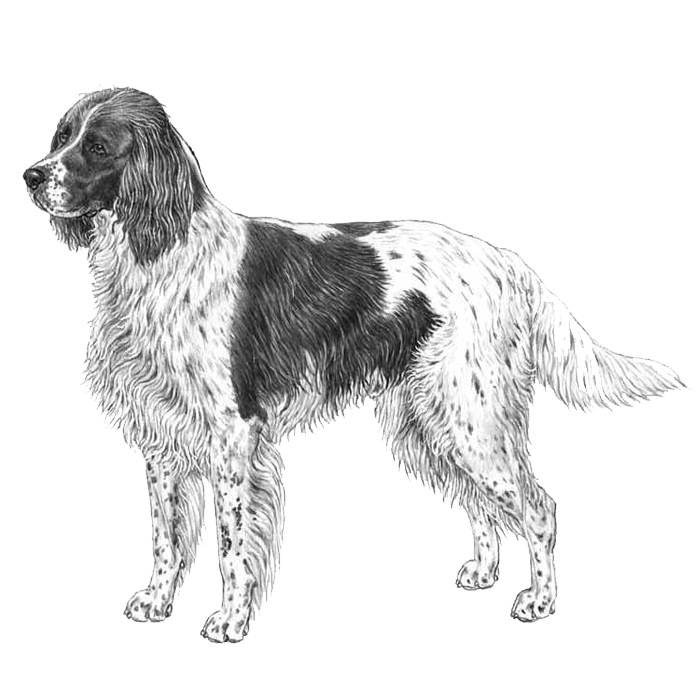 Quick Facts Height Male: 21-24in Female: 20-23in Weight Male: 45-60lb Female: 45-60lb Fun Fact When French Spaniel numbers dwindled dangerously at the turn of the 20th century, a French priest named Father Fournier took it upon himself to try and singlehandedly save the breed. He’d bring all the French Spaniels he could find into his…

When French Spaniel numbers dwindled dangerously at the turn of the 20th century, a French priest named Father Fournier took it upon himself to try and singlehandedly save the breed. He’d bring all the French Spaniels he could find into his private kennel in order to keep them safe and keep the breed alive!

French Spaniels are an old French breed. They can trace their ancestry all the way back to the 1300’s, when they were used primarily for hunting and as a companion to falconers. French Spaniels were virtually unknown outside their native France until the breed was brought to Canada in the 1970’s, where they quickly became a popular hunting dog in the marshlands of Quebec. They eventually found their way to the United States where they are still primarily used as hunting dogs, though their sweet dispositions make them excellent family pets for families that have the space to properly keep them.

French Spaniels are a lot less “Spaniel-like” than their name suggests. While they have the spaniel expression– long, flowing ears and gentle eyes– they are actually relatively large dogs and are more the size of a Setter than your typical spaniel. Because of their history as hunting dogs, they require a good deal of exercise and will suffer if not given enough time outside. While they can make good city and apartment dogs, they absolutely must be adequately exercised. They will thrive in a suburban or rural home where they will have plenty of room to run and opportunity to explore the outdoors!

French Spaniels are loving and affectionate dogs. They are very devoted to their families and are very fond of children, especially if raised alongside them as puppies. They get along well with other dogs and can generally be trusted with smaller mammals, such as cats, provided they are adequately socialized with them from an early age. They do not respond well to harsh training, and should be treated gently and patiently. Doing so will ensure that your French Spaniel learns quickly and is allowed to bloom. If scolded too harshly, they will likely retreat and become shy and fearful. French Spaniel owners need to learn to respect their dog’s delicate nature and use positive reinforcement while training them.

French Spaniels are still not super popular outside of Europe, or even outside of France. You may have better luck finding one in Canada than in the United States, because of the connection between the Canadians and the French, but if you are willing to put forth the effort, a French Spaniel ill make a lovely addition to family that can give them the gentle attention and exercise that they need.