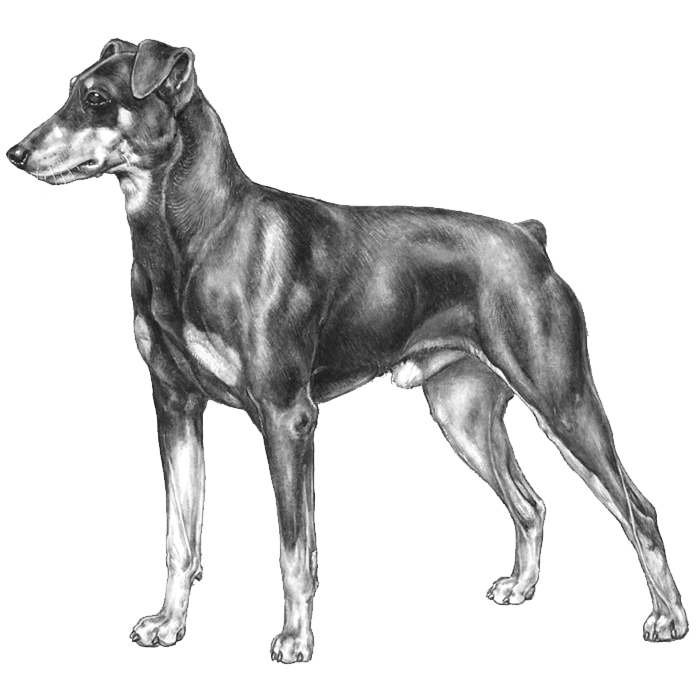 The German Pinscher is a medium-sized breed of dog, a Pinscher type that originated in Germany. The breed is included in the origins of the Dobermann, the Rottweiler, the Miniature Pinscher, the Affenpinscher, the Standard Schnauzer.

By the end of World War II, German Pinscher's were nearly extinct, with not a single Pinscher litter registered in West Germany between 1949 and 1958. Luckily, a few were left, and were smuggled across the Berlin wall, where they could once again flourish.

The German Pinscher dog breed is muscular and agile, powerful yet graceful. A medium-sized dog with an elegant appearance, this breed is admired as much for their beauty as for their intelligence. They are a working breed and guard dog, but also a devoted and loving family dog. In need of a strong leader, dogs of this breed are devoted to their families as long as small mammals aren’t included. The German Pinscher remains playful well into adulthood and their smooth coats are easy to groom.

Not recommended for homes with children under the age of nine, German Pinschers need daily exercise and cannot be left untrained or unexercised. Expect a healthy amount of exercise each day to curb negative behaviors. This breed has strong prey drive, which means they will chase anything that they deem worth chasing. Secure fences and always keep on a leash when in public. Naturally suspicious of strangers, the German Pinscher makes an excellent guard dog, but this also means they need to be socialized from a young age to prevent the development of aggressive behavior. This breed will alert bark and have a strong, loud voice, but they won’t bark without cause. Luckily, they thrive when part of a family, and can participate in family activities.