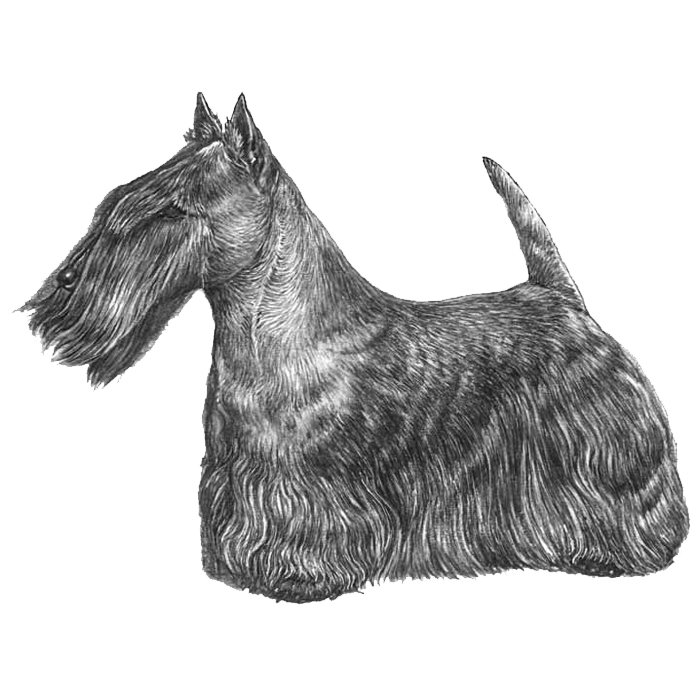 The Scottish Terrier may be small, but the breed earned its nickname “the Diehard” for a reason—they have the attitude and resilience of a true terrier. These sturdy, compact dogs make clever, feisty companions. Their characteristic beard and mustache lend them a dignified expression.

The Scottish Terrier has won the Westminster Kennel Club show a total of 9 times. That’s more than any other breed, except for the Wire Fox Terrier.

The Scottish Terrier’s black coat is iconic, but it also comes in wheaten and brindle. Historically, black was a rarer color in the breed, but it’s become more common through breeding in modern times. The Scottie has a recognizable silhouette due to their beard and mustache, which emphasize their muzzle. They have harsh, low-shedding coats that are characteristic of many terrier breeds and offer some resistance to weather. This is a smaller breed, typically weighing between 18 and 22 pounds.

Most Scottish Terriers are amiable companions these days, but generally the breed still has the prey drive and attitude inherent in some of the older terrier breeds. Some Scotties may have other “terrier traits,” such as a desire to redecorate the yard with holes and announcing any visitor (including squirrels) with a series of barks. While Scotties are lovable lapdogs around their humans, they should have an eye kept on them around small animals. This breed tends to be opinionated when it comes to training; positive reinforcement and consistent training will go a long way in convincing your Scottish Terrier to listen to you. Do not mistake a Scottie’s lack of obedience as a lack of intelligence—this is a clever breed with a “what’s in it for me?” attitude. Most owners delight in their mischievous personalities.