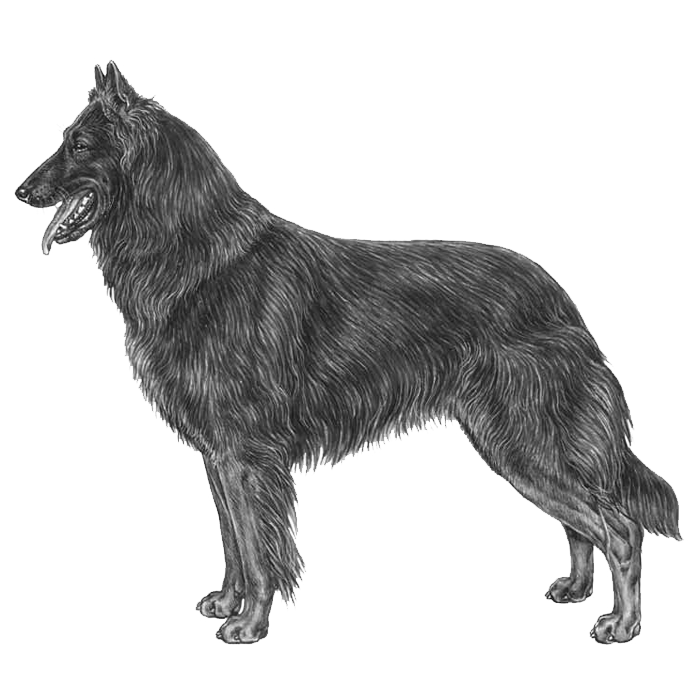 The Belgian Sheepdog is one of the four varieties of Belgian Shepherd, though the AKC distinguishes them as their own breed. This active working dog is renowned for its intelligence and drive. If given the opportunity for plenty of physical and mental exercise, the Belgian Sheepdog will astound you with its athleticism and versatility.

Belgian Sheepdogs were utilized as messengers, ambulance dogs, and freighters during World War I. They were so effective at this work that they continued to be used in World War II.

Originating from (you guessed it) Belgium, the Belgian Sheepdog is one of the four varieties of Belgian Shepherd developed as versatile herding and guard dogs. They’re often also called Groenendael or Chien de Berger Belge. In their country of origin and across Europe, the Belgian Sheepdog is typically considered to be the same breed as the Belgian Malinois, Belgian Tervuren, and Belgian Laekenois (all grouped under “Belgian Shepherd”), with their main differentiator being coat color, length, and texture. In the United States, each variety is considered a different breed. Because these breeds are separate lines and populations in the US, it’s often possible to genetically distinguish them.

The Belgian Sheepdog has a long, thick, black coat. They have a “collarette” of fluff around their neck, which tends to be more profuse in males than it is in females. However, all Belgian Sheepdogs have an abundant double coat that sheds seasonally. While their undercoat is soft, the top layer tends to be harsh. Their eyes should always be bright and full of keen intelligence — this is a dog that could probably outthink most humans!

All four varieties of Belgian Shepherd excel at multiple tasks, dog sports, and work. This is a breed that needs a job to do. Many Belgian Sheepdogs are utilized as herding dogs both in Belgium and around the world; even if an owner doesn’t have their own flock of sheep, this breed often enjoys participating in herding trials. They also find success in agility, flyball, obedience, protection work, and more. They’re superstar athletes of the dog world! However, this versatility and energy come at a cost — Belgian Sheepdogs can get bored quite easily, and their intelligence lends them to causing trouble when they’re not given enough to do. While Belgian Sheepdogs can make excellent (if sometimes mischievous) companions, they really do need owners who understand how to exercise and engage them in multiple ways.