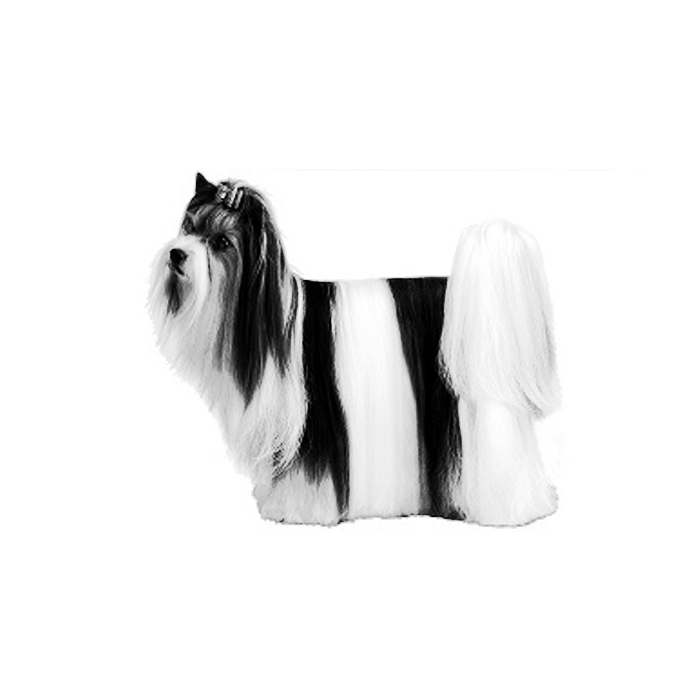 The Biewer Terrier is one of the smallest Terriers within the Toy Group, only 7-8 inches tall and typically less than 8 pounds. In spite of the small size, the Biewer is known as a robust and athletic dog.

The Biewer Terrier was the first breed to be established as a purebred through scientific data rather than pedigree data recorded in stud books.

The Biewer Terrier is a close cousin of the Yorkshire Terrier and there is much speculation as to the heritage of the breed. Mr. and Mrs. Biewer, long time established Yorkie breeders, identified a small blue, white, and gold puppy in 1984 and started what is known today as the Biewer Terrier breed.

Introduced to America in 2003 and formally identified as purebred in 2007, the Biewer Terrier Registry of America was officially formed and continues to advocate for the small terrier. In 2014, the AKC recorded the breed in the Foundation Stock Service and the Biewer Terrier is fast becoming popular for their pleasant temperaments, small size, and striking coat color.

The Biewer (pronounced like “beware” but with a V – “bee vare”) is one of the smallest Terriers within the Toy Group, only 7-8 inches tall and typically less than 8 pounds. In spite of the small size, the Biewer is known as a robust and athletic dog and an excellent hunter of vermin. Biewer are always tricolor, white, black, and gold.

The Biewer Terrier is described as a dedicated, loyal family member, with a charming and puppy-like attitude into adulthood. While friendly with strangers, the Biewer will alert owners of any company without excessive barking.

Biewers generally do well with a moderate amount of exercise such as a daily walk and play time. While they shed infrequently, it is recommended that they be groomed weekly for the best coat condition. Considered overall good with children and other pets, the Biewer Terrier is an excellent companion as well as a stylish show dog.