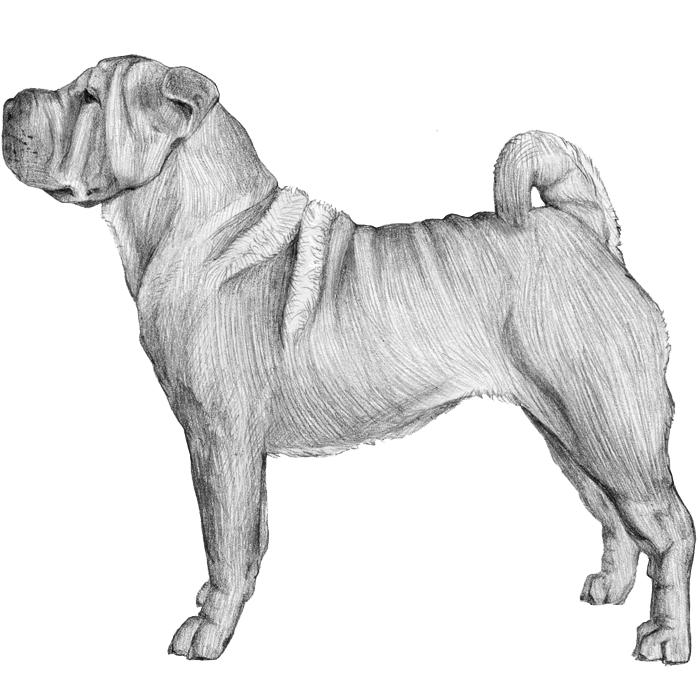 Few dog breeds are more recognizable than the wrinkly Chinese Shar-Pei. This Chinese breed is often compared to a hippopotamus due to its thick muzzle. They also have a characteristic rough, bristly coat, which is how the breed got its name (“Shar-Pei” means “sand skin”). Despite their goofy appearance, Shar-Peis are serious, independent dogs who will loyally protect their owners.

While most Shar-Pei are wrinkly, there’s another type of Pei called a “bone-mouth,” which has tighter skin and a short coat.

Perhaps one of the most instantly recognizable dog breed around, the Chinese Shar-Pei has an odd collection of traits. Their loose, wrinkly skin and thick muzzle give them a unique expression, while their blue tongue and rough coat complete the look. This Chinese breed has a long and interesting history, even going back over 2,000 years to the Han Dynasty. Though it’s difficult to say because of how old the breed is, they were thought to have been bred as all-around farm dogs, helping their owners with hunting, herding, and guarding livestock. Today, the Shar-Pei (or Pei for short) is an incredibly loyal breed who excels as a guard dog and companion for the right person.

While the loose skin of the Shar-Pei is the first trait of the breed that comes to mind for most people, they also have a unique coat. Sometimes called a “brush coat” or “horse coat,” they’re covered in bristly fur that should be straight and rough. This is one breed where a soft coat is not desirable. While their cousin the Chow Chow is popularly known to have a blue tongue, this trait is also shared with the Pei. Some Shar-Pei mixes have even inherited this characteristic.

Due to the breed’s history as a guard dog, they’re naturally suspicious and will not warmly receive strangers. Because of this trait, it’s important to socialize a Pei from puppyhood, getting them used to new people entering the home and interacting with them. A well-socialized Pei should not be aggressive without reason, but they should still be ready to defend their owners. Like all dogs, Shar-Peis require exercise, but they tend to like lounging around and are generally serene. They are not the dog breed for everyone due to the time investment in their training.