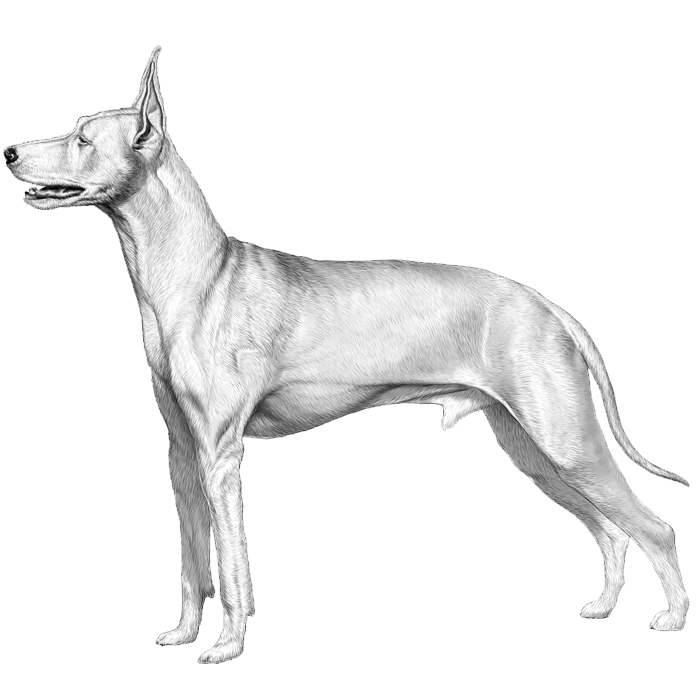 The Cirneco dell’Etna is a small breed of dog originally from Italian island of Sicily. This hound was historically used to hunt rabbits and can work for hours without food or water.

A highly prized marking on a Cirneco dell’Etna is a white star on the chest. While not required by the breed standard, this marking on the fur is well liked in Italy.

The Cirneco dell’Etna (pronounced “cheer-neck-o dell-etnuh”) is a Sicilian breed. Their name comes from Sicily’s only active volcano, Mt. Etna, located right in the middle of Catania, one of Sicily’s largest cities. Cirnecos are an ancient looking breed for a good reason—they can trace their origins to 1000 BCE. Images of Cirneco dell’Etnas have been found pressed into ancient coins, and, given these images, it seems they have changed little since ancient times. They were used primarily as rabbit hunters, and they are remarkable in that they used to be able to hunt for long periods of time with little food and water. They also have long and nimble legs, which enabled them to hop easily amongst volcanic rock.

Today, Cirneco dell’Etnas are kept mostly as pets. Centuries of hunting have left Sicily with precious little indigenous wildlife, so it’s a good thing that they make good pets. Cirneco dell’Etnas are intelligent and relatively solitary dogs. While they love their owners, they are not especially needy dogs—they are perfectly happy to curl up and nap in another room. They are sort of dual-purpose dogs: If they are raised with people, they are friendly dogs that love socializing with people and other animals; if they are kept as hunting dogs or farm dogs, they are much more suspicious and wary of strangers, and are significantly less friendly. If owners have other pets, especially small animals, they’ll want to socialize a Cirneco to them in puppyhood. In fact, they’ll want to social their Cirneco to nearly everything they can while still young and impressionable. This will assure that they raise a well-adjusted adult dog.

Cirneco dell’Etnas are known for being same-sex aggressive. If owners have other dogs, they might want to be careful about adding a male Cirneco to their family if they already have a male dog.

Cirneco dell’Etnas can live a very long time—the average lifespan is around 15 years—and Sicilians say that Cirenco dell’Etnas never forget, that they hold grudges if mistreated. How much of this is true and how much of it is Sicilian folklore remains unproven. Of course, like all dogs, if prospective owners stay on a Cirneco’s good side, they will have a loyal companion for life.