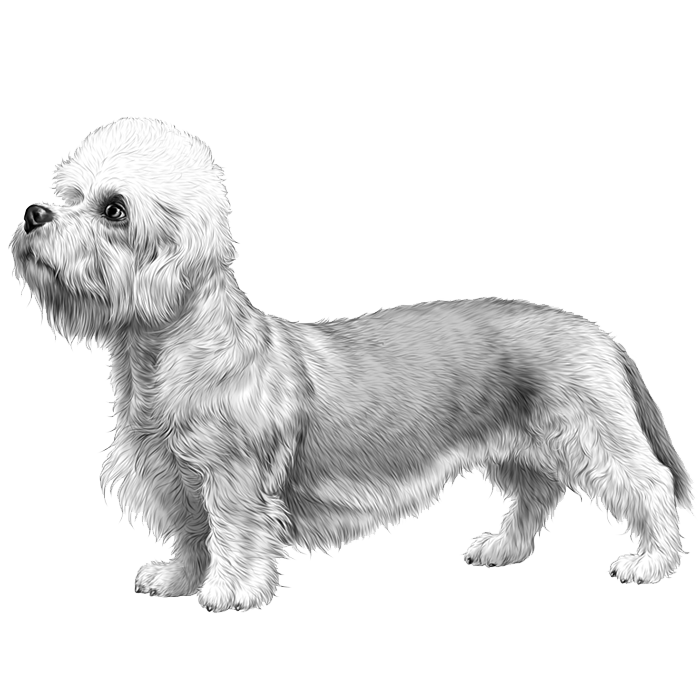 Dandie Dinmont Terriers originally were bred to hunt otter and badger. Nicknamed the gentleman of the terrier family, he is calm and reserved, yet retains his terrier tenacity and love of the hunt. His small size and moderate exercise needs make him well suited to both city and country homes.

Dandie Dimmonts were first recorded as a distinct breed around 1700.

Dandie Dinmonts are unusual looking dogs that unfortunately are becoming rare. They have large, domed heads, with large, dark eyes that are set low in the front of the head. Their long ears are set low on the skull and fringed at their tips. Dandies have large chests and long backs.

Unlike most terriers, Dandies have many curves in their shape. The back arches over the loin (the back end) and drops slightly to the base of the tail, which itself curves like a scimitar. Their front legs are short and powerful with paws that turn slightly outward for digging. The hind legs are slightly longer than the front legs, and not as heavy. They typically are 8 to 11 inches tall and weigh 18 to 24 pounds.

Dandies are affectionate, lively dogs. Like many terriers, they also are independent and determined. They are very intelligent and typically are bold in defending their territory and family, but reserved with strangers, at least initially. Many describe them as being dignified, and even 100 years ago, they were described as having “melancholy eyes as of a nobleman in disguise.”

Dandies typically get along well with children and other pets, so long as they are brought up with them or exposed to them in puppyhood.

Although their exercise needs are not great, you should always keep them on a leash in unfenced areas, as their instincts to chase game might kick in at an unexpected moment.

Training your Dandie will take a bit of patience. They seem to get bored with repetitive tasks. Make training fun for your Dandie, and you’ll be amazed at how quickly they learn and how clever they truly are.