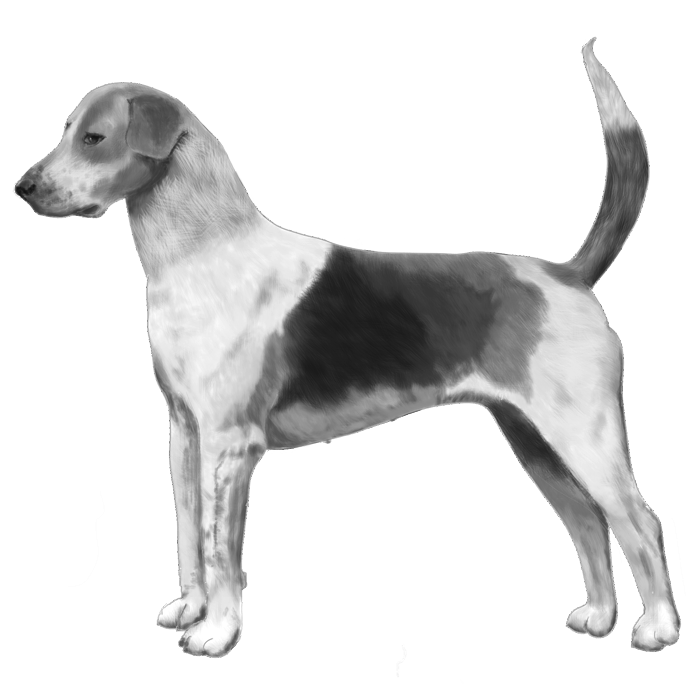 The English Foxhound is one of the four foxhound breeds of dog. It is a cousin of the American Foxhound. They are scent hounds, bred to hunt foxes by scent.

The English Foxhound is surprisingly a good choice for people who are allergic to dogs—they shed very little, and much of their excess hair can simply be rubbed off with a damp cloth. While no dog is hypoallergenic, the English Foxhound comes pretty close.

The English Foxhound can, in many ways, be described as the granddaddy of most American hounds. They have been immensely popular in Great Britain since the 16th century, where they are still used as pack hunting dogs. When they made their way to the New World with the British colonists, they were a success, as well. They were soon bred and improved upon to create the American Foxhound along with a variety of other breeds.

In the 16th century, deer became so scarce in England that noble hunters needed a new animal to hunt. They decided that foxes seemed like a good substitute, but the dogs they used to hunt deer for hundreds of years weren’t very good at hunting foxes. They needed a new breed, and the English Foxhound was born. They created them by mixing other breeds, such as the Fox Terrier, the Bulldog, and the Greyhound—all very different breeds that provided the Foxhound with different talents and characteristics.

Because they were bred to hunt in packs, English Foxhounds naturally get along very well with other dogs. They love people, including children, and they make excellent family pets provided that they are given enough exercise. They also get along well with other animals, including cats and horses, provided they are exposed to them at a young age. They are very hardy and have a lot of stamina—adequate mental and physical activity is a must.

As a result, English Foxhounds aren’t well suited for apartment or city living. They were bred to run for many miles in pursuit of foxes, so a quick walk around the block won’t make English Foxhounds very happy. They do much better in the suburbs or, even better, in the countryside.

They need to be well trained to be suitable housedogs. However, because they love people so much, they are relatively easy to train—they want to please their owners. Be careful, though. Because English Foxhounds are scent hounds, once they catch a whiff of something interesting, they are liable to continue sniffing it no matter how many times they are called. Because of this, they should not be let off leash unless they are in an enclosed area.