These are intelligent, cheerful, and loyal dogs who can make a great addition to a family. The Koolie is not an aggressive breed and is usually comfortable with new people or new surroundings. Koolies are eager to be trained null but this doesn’t necessarily mean they’re easy to train. When starting obedience training, find an instructor who understands how herding dogs work and you will wind up with an excellent companion dog.

This breed is also known as Coolie, German Koolie, or Australian Koolie.

Australia’s livestock-based lifestyle today and in the past has depended on the help of dogs. The immigrants in the late 1700s and early 1800s brought their European dogs with them. The name German Coolie was probably in reference to the German immigrants and the dogs they brought with them. It is possible it was a slang word for collie (referring to the German’s Collie), or even a derogatory name for the dogs meaning they were less than purebred. The more historic name for the dog is German Coolie. More recently some people have started calling the dogs Australian Coolies or Koolies. They are all dogs of the same history and origin.

No one really knows the exact origin of Coolies, but there are written accounts of people referring to the importation of a German spotted dog called a Tiger dog which had “silver” and was multi-colored like some German Coolies found today. Some Coolies are merle but many are also solid in color. They are medium in size (30-50 pounds), 18-24 inches tall and can be short or longhaired.

Today the versatile German Coolie continues to work on Australian stations and ranches herding all kinds of livestock and backing on sheep. They are also present in agility rings, in dock diving, in flyball and Frisbee, as search and rescue dogs and as companion dogs. They are known for being versatile, biddable and for having an “off switch”. Their presence in countries outside of Australia is becoming more common. 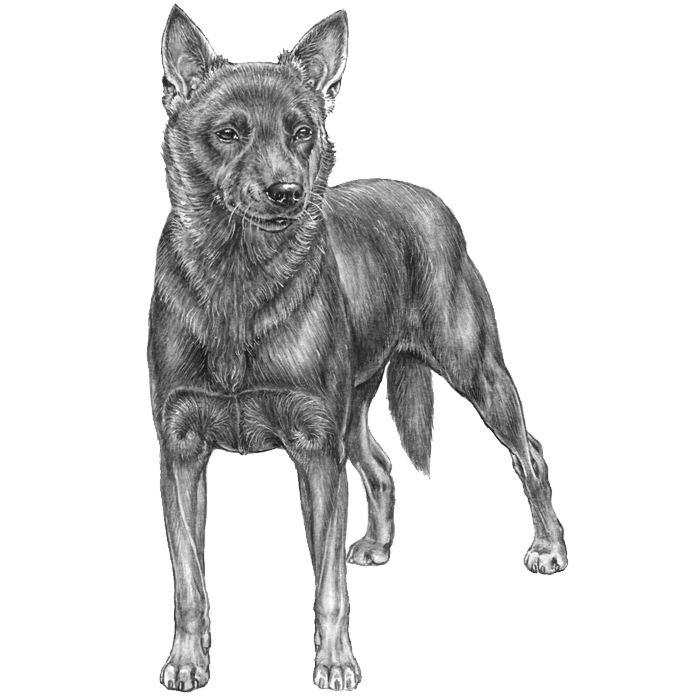