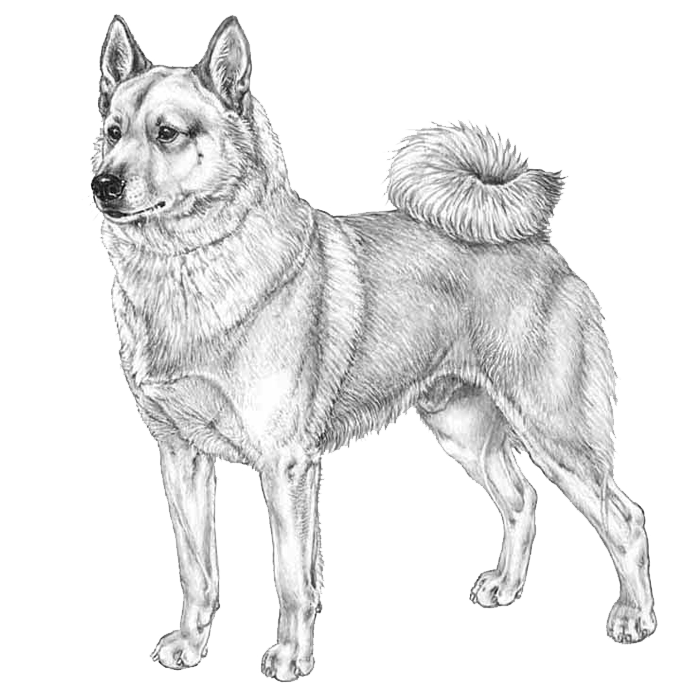 The Norwegian Buhund is a versatile, affectionate spitz-type breed with a long and interesting history. This breed is often associated with the Vikings, and traveled with them by land and sea. They were also used as all-purpose farm dogs; the “bu” in Buhund even means homestead or farm. While the Buhund makes an excellent companion, they have a lot of energy and like having a job to do.

The Norwegian Buhund is a Norwegian herding breed with very ancient origins. This is a breed that has remained relatively unchanged over the centuries! Originally a breed used by the Vikings to herd reindeer and other similar livestock, Norwegian Buhunds are still used as herders today.

Since they are a breed that was valued by the Vikings for their tirelessness and work ethic, it’s probably not surprising that Norwegian Buhunds require a great deal of exercise and time outdoors. They used to accompany the Vikings over great distances, both on land and at sea, and are accustomed to spending lots of time outside. They won’t do well in an apartment, and are much better suited to rural and suburban living (they also have a tendency to be very vocal, which is a nice way of saying they bark a lot, so the more space between you and your neighbors, the better!) .

Extremely intelligent and occasionally very stubborn, Norwegian Buhunds (like all breeds) require a lot of early socialization and training to make good pets. If you don’t have a job for your Norwegian Buhund to do, you’ll need to make sure they are given adequate exercise and mental stimulation or you risk having a bored and destructive dog in your midst. Because of their intelligence and high energy, Norwegian Buhunds excel at dog sports, especially agility, and will be delighted if given a job to do or a task to complete.

Norwegian Buhunds are well known for their love of children, and are definitely a good choice for families with kids, though they have a tendency to not know their own strength so should absolutely be supervised with small children. They do well with other dogs as long as they are raised with them from puppyhood, but can be territorial and must be taught from an early age to differentiate between friend and foe.

Norwegian Buhunds are not a good choice for a family of couch potatoes. They will thrive with people who enjoy outdoor activities such as running or hiking. They are still not very popular outside of Norway, but can be found in North America. If you think that a Norwegian Buhund is right for you, you may need to do a bit of searching but will likely be able to find a puppy.