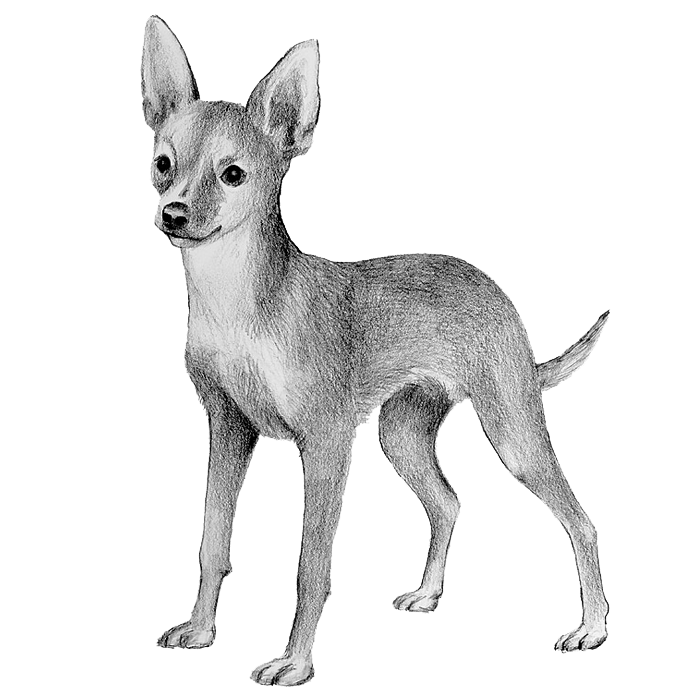 Like many other Russian breeds, the Russian Toy was saved from extinction by the fall of the Iron Curtain in the 1940’s, when Russian dogs were allowed to be exported around the world and gained popularity.

Russian Toy dogs are one of the smallest breeds in the world. While they are primarily kept as pets, they were actually bred to be ratters (which seems a little surprising because they aren’t much bigger than a rat!) and still have a bit of that feistiness in them. They come in both smooth and long-haired varieties, and they look a little bit like Chihuahuas.

Russian Toys can trace their history back to the 1700s, when they were commonly found on the laps of the Russian nobility. The first official record of the Russian Toy as a distinct breed comes from the early 1900s, when a few of them were entered into a dog show in Saint Petersburg. Russian Toys made their way across the world to the United States in the 1990s, and were officially recognized by the American Kennel Club in 2022. The breed is now eligible to complete at AKC dog shows in the toy group. The Russian Toy Club of America is the official AKC parent club of the breed in America.

Russian Toys make excellent companions for city dwellers. They are cheerful, friendly, and loyal little dogs who like nothing more than snuggling up on your lap. While they require some physical activity, just like all dogs, they are relatively low maintenance and will do very well in an apartment. They are equally suited to the suburbs or the countryside, provided they are kept as strictly indoor dogs. They do well with other pets, particularly other dogs and friendly cats, especially if they are introduced to them as puppies. Russian Toys are not suited to families with small children, as they are delicate and small and should only be handled by careful hands!

Owning such a small breed of dog comes with a variety of special considerations, both health-wise and lifestyle-wise. Tiny breeds like the Russian Terrier often need special food, special health care, and special attention to make sure they are not inadvertently injured. Russian Terriers will do best in a low key home where they can fulfill their destiny as loving lapdogs, and would be the perfect companion to an elderly person or a quiet adult family. If your idea of the perfect pet is a rough and tumble little dog that can accompany you on hikes or running through the park, the Russian Toy isn’t the dog for you. This is a small, delicate and loving dog that is happiest when they are begin pampered.