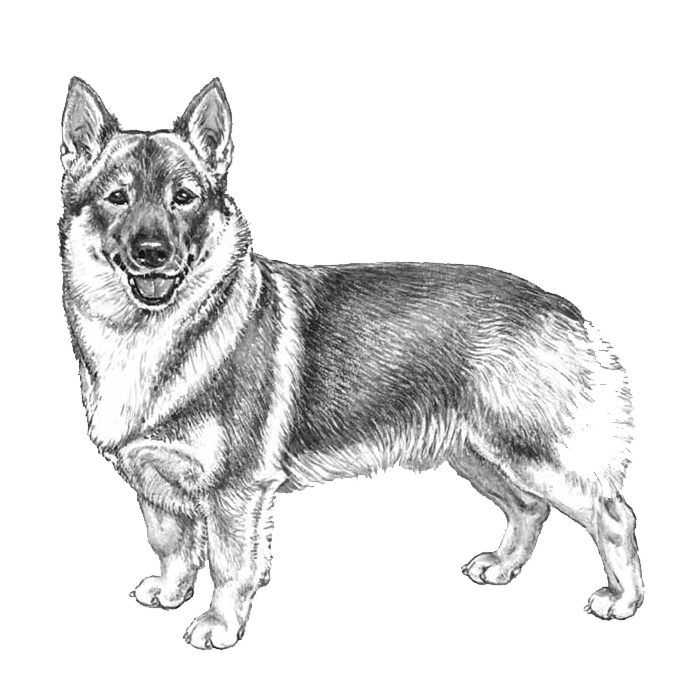 Short, long, and bushy tailed, these cute little dogs are highly intelligent, super agile, and can trace their history over 1000 years!

The skeletal system of a Swedish Vallhund is extremely similar to that of a Norwegian Elkhound, a dog many times it’s size! This is evidence of their common ancestry, leading us to believe that Swedish Vallhunds were originally much larger and only got smaller as they were bred to shorter dogs over the centuries.

Swedish Vallhunds are a Swedish breed of herding dog. Short, long, and bushy tailed, these cute little dogs are highly intelligent, super agile, and can trace their history over 1000 years!

Swedish Vallhunds are a national breed of Sweden, and are well-known and well-loved in that country as formidable little working dogs and loving family pets. They originated in a part of Sweden named Västergötland, where they were used to herd and guard livestock. It is also possible that they were brought to England by the Vikings at some point during the 8th or 9th century where they mixed with English dogs such as the Welsh Corgi (whom they resemble a great deal.) It may be hard to believe that these dogs were capable of doing jobs like dealing with livestock, given their size, but Swedish Vallhunds are courageous and intelligent dogs and shouldn’t be underestimated!

Swedish Vallhunds are extremely athletic dogs. They excel at dog sports such as agility, fly ball, and herding, and definitely are a breed that needs a “job” to do. They are an ideal choice of pet for a family that lives on a farm but prefers to keep a smaller dog in the house. If you don’t have sheep for your Swedish Vallhund to herd, it would be good to enroll them in some sort of dog sport to keep their agile minds occupied and keep their energy levels down. They will quickly get bored if not given something to do, which will only exacerbate their hyperactivity and will make them harder to live with. They thrive with proper training and a ton of exercise, and will then be happy to curl up at your side at the end of the day. They can make good apartment dogs if given enough exercise, but are really better suited to the suburbs or the countryside. They do well with children and other dogs, and can be trained to accept cats and other pets (though they may try and herd them!).

While still relatively rare outside of their native Sweden, Swedish Vallhunds are beginning to gain in popularity all over the world. If you have your heart set on one, you are likely to be able to find a breeder in the United States (though perhaps not a breeder close to where you live). Once you find one, though, the Swedish Vallhund will bring a ton of short-legged joy into your family.