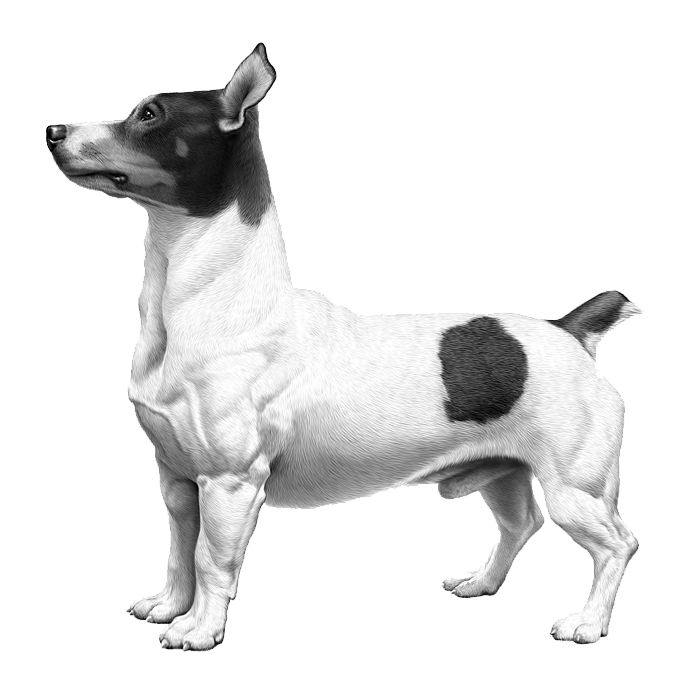 The Teddy Roosevelt Terrier is an American breed developed to be both effective ratters and devoted family companions. While many Teddies are loving pets, they’re a versatile breed also at home competing in barn hunt, agility, and more. Teddies can have long or short legs and come in multiple colors.

Teddy Roosevelt Terriers vary greatly in size- some of them weigh as little as 8 pounds, while others weigh in at 20 or even 25 pounds! This is very unusual in purebred dogs, where the standards for size are usually very stringent.

Teddy Roosevelt Terriers are a small-sized American hunting terrier. While they are lower-set with shorter legs, more muscular, and have heavier bone density than their cousin, the American Rat Terrier, they share a common early history.

Descended from the terriers brought over to the United States by English miners and other working-class immigrants, their ancestors probably included the old English Black and Tan, the Smooth-Coated Fox Terrier, the Standard Manchester, the Old Bull Terrier, the now extinct English White Terrier, the Wry-Legged Terrier, and the American Bench-Legged Feist. Other possible dogs which may be in the ancestry are the Turnspit, the Beagle, the Corgi and the Italian Greyhound or Whippet.

Universal was the first to begin registration of Rat Terriers as purebred dogs in the 1930’s. UKCI then began labeling the shorter stockier version as Type B Rat Terriers, which became the Teddy Roosevelt Terrier in 1999, when they were accepted into UKC as a separate breed from the Rat Terrier. UTRTCA.org is the Breed Club website for UKC.

In August of 2016, The ATRTCA was formed as The TRT Breed Club and began the process of establishing Teddy’s as an AKC accepted breed. TeddyRooseveltTerriers.org is the AKC Breed Club website.

Teddies haven’t always been known by their Presidential name; they have been called the “Type B” Rat Terrier, the Short-legged Rat Terrier or the Bench-Legged Feist in years past. It wasn’t until 1999, when the UKC (United Kennel Club) recognized the Teddy as a separate breed from their “cousins”, the American Rat Terrier, that they officially became known as the Teddy Roosevelt Terrier in honor of the much-loved 26th President of the United States. He was an avid Hunter, Sportsman and Preservationist, and his affinity for his family’s hunting feist, which rid the White House of vermin, caused him to coin the name Rat Terrier and drew attention to the usefulness of these tenacious hunters.

Teddies have a wonderful temperament! Teddy Roosevelt Terriers are family dogs that love to please. Whether a Teddy lives on a farm or in a city apartment, this special breed is a wonderful member of any family. They are well-known to be affectionate, energetic and alert dogs whose curiosity and intelligence make them very easy to train. Teddies are adaptable to their surroundings and are truly devoted family pets. They travel well and are wonderfully good with children and the disabled.

True to a terrier’s nature, they will hunt squirrel, love to dig up moles, and will rid the premise of any unwanted vermin, but most nights you will find a Teddy cuddled up on the couch with the family or burrowed under the blankets on his master’s bed. They can be playful and silly one minute and then easily settle and become calm the next. Even “big dog people” easily fall in love with Teddies, since they tend to act like and easily befriend larger dog breeds. They typically get along well with other dogs (and cats, if raised with them) due to their excellent team working, pack mentality. With their desire to please, they may also participate in a wide variety of physically active events, including Agility, Weight Pull, Barn Hunt, and more. Of course, if given a chance, rounding up rats and squirrels is a Teddy’s favorite pastime!