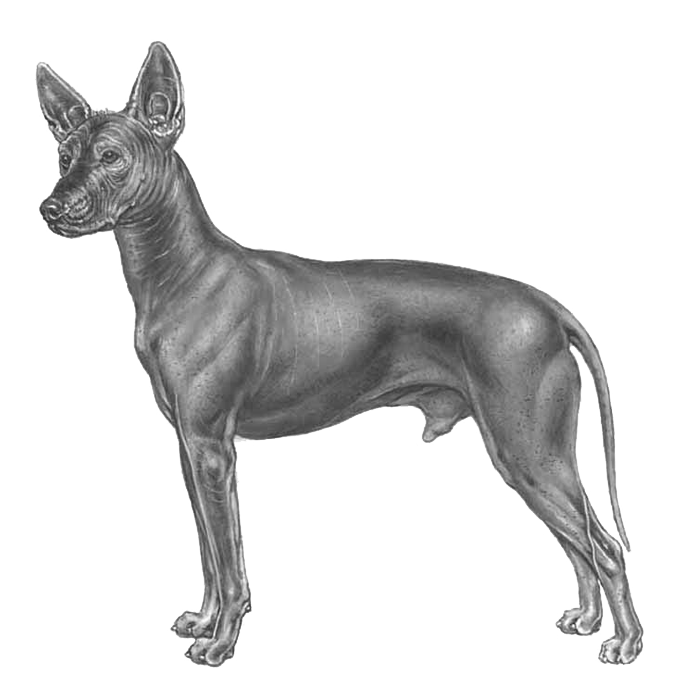 Xolos are hairless, which contributes to their striking looks. Don’t be detered, their warm body and affectionate behavior makes them a great companion dog.

Hairlessness is caused by the same dominant mutation in Xolos, Peruvian Inca Orchids, and Chinese Cresteds. Dogs without the mutation have fur and are called "powder puffs". A different mutation, recessive in inheritance, is the cause of hairlessness in American Hairless Terrier.

Commonly known as the Xolo, this breed’s ancestors are considered to have arrived with the first settlers on the American continent from Asia – crossing the Bering land mass that is now submerged by the Pacific Ocean. It is also of popular opinion that the Xolo wasn’t bred from the crossing of different breeds. Since their creation centuries ago, the Xolo have developed by natural selection rather than through human influence. This warm-bodied canine was used by ancient people for companionship, warmth, and even protection from evil spirits on the path to the underworld. This breed was first officially recognised by the AKC in 1887 but during the 20th century their popularity and numbers significantly declined to a level where they were removed from the AKC’s book. However in more recent times the Xolo has made a comeback, as the AKC re-recognized them as on official breed again in 2010.

The Xolo comes in a few different sizes ranging from small to large, so this breed is adaptable to most homes. Xolos have a distinct look – with large ears, squinted eyes and a mohawk patch of fur running down the middle of their head. They can be tentative towards strangers but protective and affectionate with their owners. While requiring no brushing, Xolos need to bathed regularly. This relatively rare breed ranks as the 140th most popular.

The History of Dogs and Day of the Dead