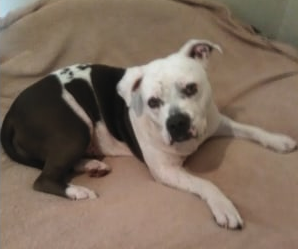 Gracie was adopted in November 2017 at only 6 weeks old. Christopher had just experienced severe health complications and was looking for a light in his life when he found her. Someone had posted online about a litter of puppies that needed homes, so Christopher went to meet the pups. As soon as he arrived, Christopher was greeted by the homeowner, who was holding this tiny little thing with bright blue eyes.” Christopher instantly knew she was the one who would become his service dog.

After returning from working overseas as a combat veteran, Christopher had planned on raising a puppy to be a service dog for the PTSD he suffers from. He and Gracie clicked right away. Christopher said that “she wouldn’t stop kissing [him] the entire ride home.”. Since that day, they haven’t left each other’s side. 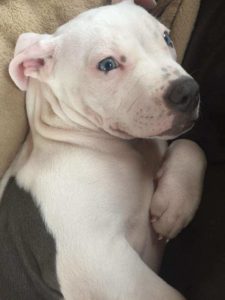 Christopher and Gracie began their training together immediately. Mastering basic obedience was a breeze for the pair. Once it came time for Gracie’s specific service task training, the two were guided by a company that specializes in this. Service dogs must be trained to their owner’s needs, so not all training is the same. Christopher and Gracie spend all of their time together, something Christopher contributes to how well Gracie is able to read and react to his body language. 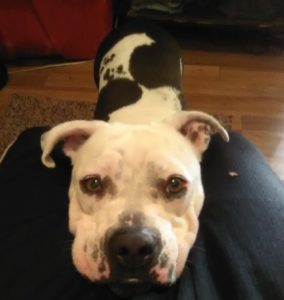 “It’s amazing how well you can communicate with them without words,” he says. Thanks to their close connection, Gracie is able to tell when Christopher is experiencing flashbacks, beginning to exhibit anger, having nightmares, and more.

As part of her service, Gracie alerts Christopher when he’s getting upset by barking at him or nuzzling into his body. If necessary, she’s also been taught to jump on Christopher. This transfers his full attention to Gracie and away from trouble. Gracie is very vigilant and will lay on Christopher’s chest in the middle of the night when he’s having trouble sleeping due to nightmares. Christopher says that Gracie has “saved [his] life on many occasions and continues to do so” by being there when he wakes up and giving him a daily purpose.

Christopher likes to think of their relationship as a partnership; they both “help each other navigate life every day,” he says. The trust they have in each other is endless. Christopher likes to reward Gracie’s hard work as a service dog by building in daily time for her to be off duty and play like a puppy. 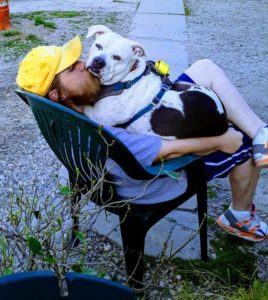 Christopher decided to test Gracie with Embark with the main goal of learning about her potential health risks. As a pup, Gracie had a histiocytoma removed from her left flank. The tumor removed was benign, but Christopher wanted to know if she’d be at risk for other health issues in the future. Luckily, Gracie was cleared of all the genetic diseases Embark tests for. She was, however, found to be a carrier of just one mutation that could be passed on to potential puppies.

Gracie was adopted with no information about her breed. Christopher was excited to find out, through her Embark results, that she is 100% American Bully. While breed wasn’t important to Christopher, he was thrilled with this information. He says, “there are far too many bully type dogs in shelters and the stereotypes surrounding them are ridiculous”. Gracie puts those negative stereotypes to shame, as she shows nothing but love to everyone and everything she meets. She even plays with the pet ferrets in Christopher’s family. 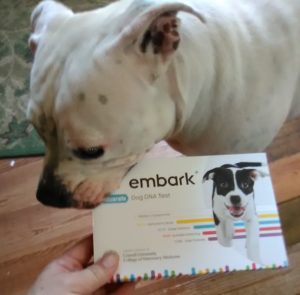 While service dogs may look like any other dog on the street, it is important to note that when a dog is wearing a working service vest, they are indeed working. Not all dogs, or people, want to be approached when working so it is important to always be respectful. Service animals have worked hard for their title and that should be taken seriously. CHRISTOPHER supports anyone who needs a service dog but emphasizes the importance of proper training.

Want to see more of Gracie? Click here to view her Embark profile.

Has your pup been Embarked, yet? Order yours today, here!