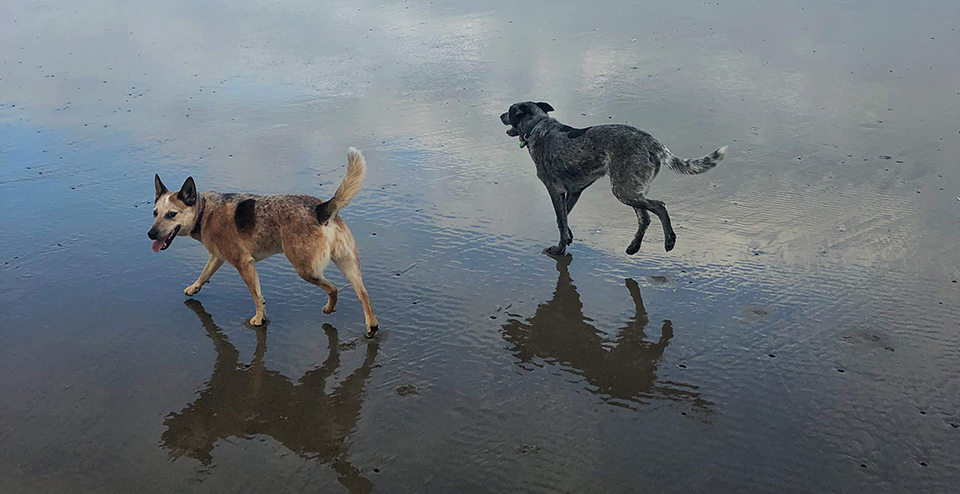 Friends of Embark, Amanda and her fiancé John, are proud pup-parents to Roscoe and Riley. This happy California family recently ran into a canine health issue and turned to Embark for clarity. Let’s get to know this pack! 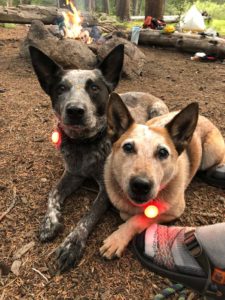 Roscoe was in John’s life before he met Amanda! However, the pair adopted Riley together. Both pups were rescued from a kill shelter in Kentucky. Roscoe is a 6-year-old mix who was originally found tied under a trailer. After taking an Embark test, Amanda learned that Roscoe is about 50 percent Australian Cattle Dog with some Labrador Retriever, Doberman Pinscher, Airedale Terrier, and Supermutt in him.

Amanda says Roscoe is the “dog version of a Honey Badger” and incredibly intelligent; he outsmarts her and John at every turn, she explained.

“He’s an opportunist,” Amanda said. “He has a very big personality. He’s emotionally sophisticated with an incredible range of emotions: torn, stressed, anxious, happy, confused, and more. There is so much personality packed into him, you learn a lot from him whenever you hang out.”

Roscoe loves any type of food and occasionally sneaks into the bathroom to eat toilet paper. He gets “super excited” about birds and has a strong emotional attachment to toys. His favorite activity is to carry and nurture his toys; he especially loves stuffed animals. He may be sweet with his toys, but don’t use baby talk when communicating with this pup. He will growl at you.

Chew on that for a minute while we get to know Riley.

Riley, an Australian Cattle Dog, was found as a stray wandering around Kentucky. Amanda and John added Riley to their crew so Roscoe would have a friend. Riley loves organization and having his herd stick together.

“First and foremost, he wants to get everyone together and have them move as a group,” Amanda said.

If the family is out for a hike and one is walking slowly, Riley will hang back and ensure no one gets lost. He’s smart, funny and focused, Amanda said.

“He really cares about my happiness and making sure we get to do fun things together,” she explained.

Roscoe and Riley are the treasures of this family.

“My life would not be as interesting without them,” Amanda said with a smile. 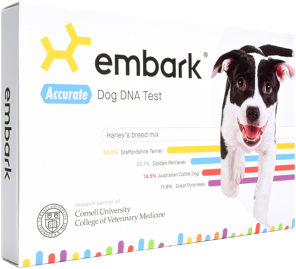 Amanda and John decided to get Embark Dog DNA Tests for their fur-kids due to their veterinarian’s recommendation. Riley has a serious eye condition, Primary Lens Luxation. This genetic health condition is surgically correctable; it causes the lens to detach from its normal place within the pupil, leading to reduced visual acuity and irritation to the surrounding tissues.

The lens in Riley’s right eye became detached and then trapped in front of his pupil. He needed emergency eye surgery, which went well. Luckily, Riley was able to make a full recovery. However, had they had learned about the condition earlier with Embark’s Dog DNA Test, and knew that Riley had two copies of the mutation, it’s possible that the surgery could have been prevented.

Because this genetic condition is common in Cattle Dogs, Amanda and John wanted to ensure that Roscoe was safe as well. That’s why they immediately took their vet’s suggestion to get a DNA test for both dogs. That way, Amanda and John could be armed with as much information as possible to properly care for their doggos.

It turns out that Roscoe is also At Risk for Primary Lens Luxation, but only has one copy of a mutation in the ADAMTS17 gene. This mutation is known to have an additive effect, so while dogs with one copy of the mutation, like Roscoe, have a higher risk than dogs with two healthy alleles at ADAMTS17, their risk is much lower than a dog with two copies of the mutation, like Riley. So while Roscoe has a lower risk than Riley, Amanda and John are still taking preventative measures to ensure their pups are healthy. And that started with a trip to their vet’s office to discuss a care plan. Since Roscoe is lower risk, they aren’t doing much right now in terms of preventative care. However, at his next checkup, Amanda and John plan to see if they can check his intraocular pressure.

With Riley, they are taking preventive steps to try to keep his left eye from needing the lens removed.

“He gets glaucoma and steroid medication, as well as another eye drop that makes his pupil small to limit the risk of his lens becoming trapped at the front of his eye and to try to help keep it in place. We are continuing to administer eye drops in his right eye (he had the lens removed from) to try to keep his eye from going 100 percent blind,” Amanda said.

The Embark test made Amanda feel more confident about the future of her four-legged friends, and now she’s “not as worried about all the potential things that could happen.”

Here’s to a healthy and safe future, Roscoe and Riley! Paws up!

Click here to see Riley’s Embark results and here for Roscoe’s. And if you’d like to get your pup a dog DNA test, just click here to get started!