Meet Kaylee and Wiley, two pup sisters from California who were reunited after their parents learned about the connection with Embark’s Doggy DNA Relative Finder! 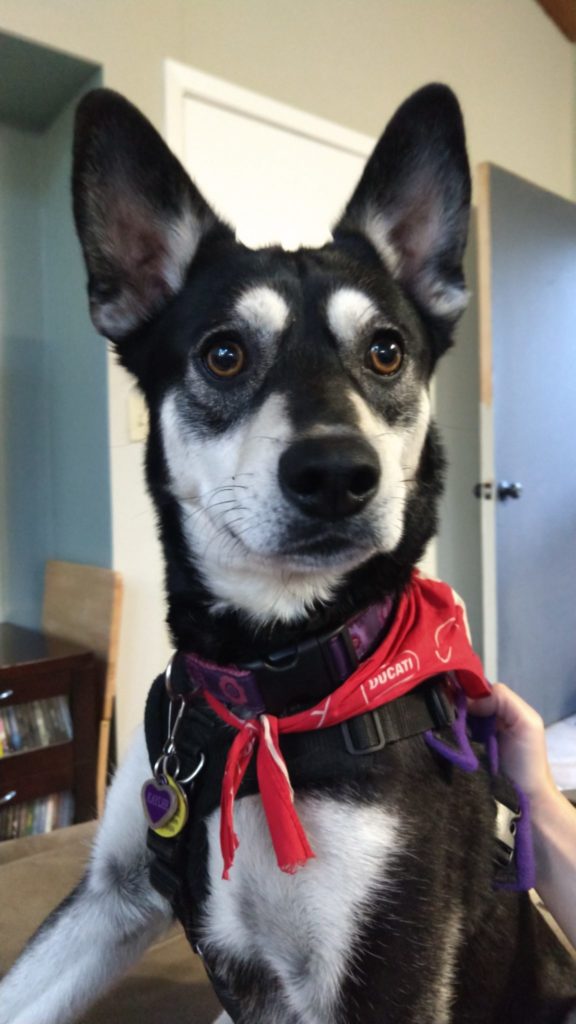 When Ryan and Kristen first went to the animal shelter in Oakland, Calif., they were sure they’d be meeting a pup they had read about on the shelter’s website; however, when the pair arrived, they found out that the dog had a forever home already. This is how they met Kaylee.

“Kaylee was brought into the room and immediately I could tell she was an intelligent dog by the way she surveyed the layout and the people. She was smaller than our last, Luna, but looked definitely Husky-like,” Ryan said.

Ryan and Kristen were told Kaylee was a stray who’d spent time on the streets and had probably never known a loving home. Although Kaylee was wary at first, she went for a short walk with them. It was immediately obvious that Kaylee had little experience on a leash and didn’t follow any commands except “sit.”

Ryan and Kristen left the shelter that day without making a decision about adopting Kaylee, but later they heard Kaylee might be shipped out-of-state and knew they had to be the ones to bring her home. Kaylee has proven to be a strong-willed, affectionate, and decidedly silly pup.

“She has a funny habit of occasionally somersaulting when she gets in bed or on the couch for cuddles. She tucks her head and goes all the way over. Plus, she can stand for a really long time and walk on her hind legs as well as ‘hop’ on her hind legs for a good distance,” Ryan explained.

Ryan also says Kaylee’s a huge cuddler. When they first adopted her, she might’ve snarled if someone went to hug her but now she loves being “smushed” by them.

“When my wife and I are hugging, she will come over and stand up and put her paws on us as if to say ‘me too!’” Ryan said. 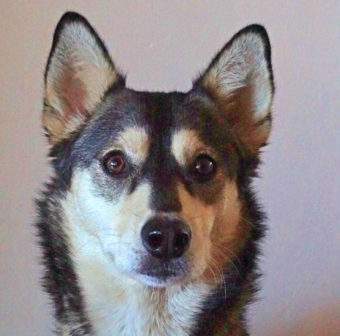 Judy and her husband weren’t necessarily looking for Wiley, but they all found each other anyway!

“Wiley was dumped at the barn where I board my horse in Oakland, Calif. A couple driving by in the area had seen her slinking around on the streets and captured her. They wanted the animal lovers at the barn to do something with her,” Judy recalls. “Two barn pals who have rescued many animals — from bunnies to birds and rats — got Wiley out of the car. She was terrified, her tail tucked into a permanent tail wedgie. Besides observing she was adorable and a near perfect size, I thought she deserved a loving home and my husband agreed. So we took her in.”

Judy and her husband have noticed some pretty amusing aspects to Wiley’s personality since bringing her home.

“Wiley loves to sploot and does so a lot. She also is big on zoomies when she gets wound up and sometimes goes so fast she has trouble stopping. She also has been known to do ‘Husky spins’ like a Tasmanian devil,” Judy said.

Embark added a relative finder feature in 2018 aimed at helping pup-parents connect with their dog’s relatives. This is how pup sisters Wiley and Kaylee first connected.

Everywhere Judy went, people wanted to know what breeds Wiley had in her.

“Because so many people stopped to ask us what breed Wiley is, we thought it would be fun to do her DNA,” Judy explained. “I did not know about the relative finder feature and love it.”

The only breed Ryan and Kristen knew Kaylee had in her for sure was Husky, but they weren’t sure if there were other breeds in her mix that could account for her smaller size. Once they collected the sample of Kaylee’s DNA (a simple cheek swab) and mailed it off, Ryan and Kristen weren’t thinking too much about Embark’s Doggy DNA Relative Finder. At first, they were mostly interested in learning about Kaylee’s breed mix and any genetic health conditions she may be at risk for, but when Judy contacted them about her pup being one of Kaylee’s siblings, they were super excited to set up a playdate.

Kaylee and Wiley together again 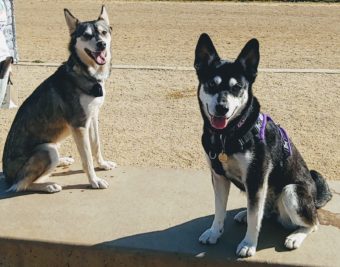 Kristen and Ryan imagined all sorts of outcomes before the date of their pup-reunion. Would these pup sisters remember each other? Would they be happy to see one another?

When the day finally arrived, “Kaylee seemed to treat Wiley like any other dog she has met at the park, but they got along well and were running around the park together towards the end, and we will definitely be planning another play-date for Wiley and Kaylee. We’re happy to have found Kaylee’s sibling. It’s a neat aspect of dog ownership we never got to experience before with our other rescue dogs. Unlike those that adopt from breeders, we don’t know where our dogs siblings went or have the option to have them get together,” Ryan explained.

Judy also noticed that the pups were definitely friendly towards each other from the beginning. She also recognized all the differences and similarities in their personalities and appearance.

Kaylee and Wiley “look alike and share some behaviors; Kaylee is very bold, while Wiley is more timid. And Kaylee is an exceptional athlete and knows many more tricks than Wiley, but they both seem to be smart and quick learners.”

Judy said they will definitely get the pups together again.

“We certainly recommend Embark to everyone that is curious about their dog’s genetics. It usually still starts with the question, ‘What breed is your dog?’ Now we can tell them! This naturally leads us to talk about our Embark experience and the health screening and our fun story about Kaylee and Wiley meeting,” Ryan explained.