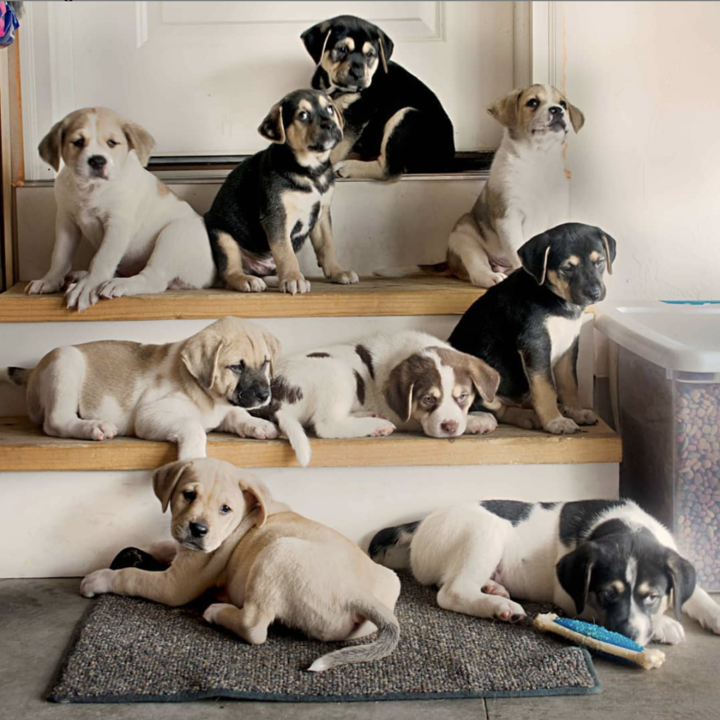 When two different purebred dogs have puppies, the resulting litter can have a wide spectrum of looks. This effect is compounded if the parents themselves are mixed breed. Sometimes it can be hard to believe the puppies are related going solely off their appearance. While it’s possible for one litter of puppies to have multiple fathers, the more likely explanation for different-looking siblings is the way genes are passed down to offspring during meiosis through segregation and recombination.

Meiosis is the process by which the two copies (one from each parent) of your chromosomes are assorted into gametes (sperm or eggs). Imagine each pair of your chromosomes as a red and blue marble. Meiosis starts with the process of segregation. Using the marble example, segregation would be choosing one marble from each pair at random. That generates plenty of combinations of marbles, but what if we wanted even more variation, like multi-colored marbles or marbles of different sizes? That’s where recombination comes in.

Put simply, recombination is when the DNA content in a pair of chromosomes in a parent is shuffled before being passed onto their offspring. This shuffling occurs each and every generation to create additional genetic variation. This is how related puppies can look different from each other, and also why you and your sibling don’t look exactly alike.

Let’s take a closer look by examining the process from start to finish.

During recombination, a chromosomal pair in the parent (which was inherited evenly from the grandmother and grandfather) splits in two. While the split happens, the two chromosomes have an opportunity to exchange DNA. Different pieces of the maternal and paternal chromosomes exchange places with each other, but the amount that’s exchanged is random. The resulting chromosome in the offspring could look like a 60-40 split between the grandmother and grandfather or a more drastic ratio like 90-10.

Because of segregation and recombination, no two offspring inherit the exact same chromosomes from their parents. This explains why puppy siblings can look so different from each other. One puppy may inherit a genetic variant for black fur, while another puppy from the same litter may inherit a variant for yellow fur. Similarly, puppies from the same litter can also have different coat lengths, ear floppiness, and grow to different sizes.

Recombination can even go as far as to explain littermates inheriting different percentages of breeds. Breeds are inherited just like any other gene, so different puppies will have different proportions of the breeds their parents passed down, given recombination.

Let’s wrap up the lesson with a dog food metaphor. Think of a dog’s DNA as a bowl of food. This bowl is a mix of food from the mother and father.

Mom’s bowl is now a mix of beef, peas, chicken, and spinach. She pours half of her food into a new bowl for her puppy. Now that every flavor is mixed in together, it’s nearly impossible to scoop out the same portion of each every time.

Meanwhile, Dad is pouring out half of his bowl as well. He inherited the flavors of turkey, potatoes, fish, and squash from his parents’ bowls.

Each puppy will get half their food from Mom and the other half from Dad, but the portion of all 8 flavors will be different every time. Some bowls may taste similar enough not to notice a difference, but other bowls will taste wildly different.

This same principle is how puppies can end up looking so different from each other even though they all came from the same litter. The DNA/food flavors may have all come from the same source, but the different combinations are endless. Recombination is one of the factors that contribute to this variability.

If you want to learn more about dog genetics, visit our education center each week for new lessons, videos, and activities.