Meet 12-year-old siblings, Allie and Cooper. These two gorgeous pups have lived their whole lives only an hour away from each other in Michigan…but their parents had no idea until Allie and Cooper used Embark’s Dog DNA Test Kits and explored our Relative Finder tool, revealing their nearby family members.

Allie got her Embark Dog DNA Test results back in 2016. Her family learned that she is a mix of Beagle, Russell-type Terrier, German Shepherd Dog, and a whole lot of cute. Her adoptive parents met and rescued Allie from a shelter on what would have been her very last day. 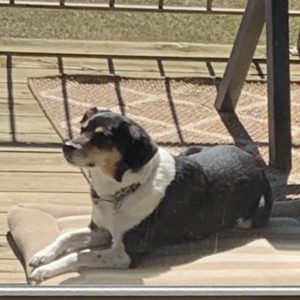 This sweet girl goes by the nickname of Allie-Cat because of her cat-like behaviors. Allie is often caught licking her paws to wash her face and ears. Judy, Allie’s adoptive parent, learned that Allie loves chicken and began using this knowledge as a training tool. One trick her mom taught her is to go to her “place,” meaning that she should lay down on her mat in the living room whenever the doorbell rings so that she doesn’t rush to meet the guests at the door and overwhelm anyone. Allie is also a big fan of playing peek-a-boo, which she does by covering her eyes with her paws and peeks out when the time is right. Recently, Allie has learned to help her mom out by picking up pine cones that fall from the big trees around their condo and put them where Judy asks.

Just like his sister, Cooper is coming up on his 12th birthday. With the same breed mix as his sister, he is taller and thinner than Allie, but clearly just as adorable. In fact, Cooper is tall enough to reach the dinner table and has been known to sneak a little snack and run off with it #countersurfing. 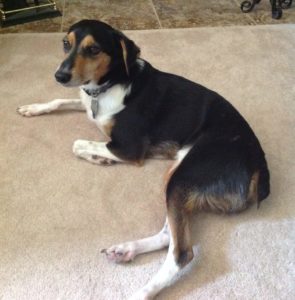 Cooper likes to lay on his tummy when he rests but sometimes is found curled up, sleeping in a ball, just like Allie-Cat. According to Pam, Cooper is a furry leader who loves to show his four-legged pack around at the dog park. He will befriend anyone and everyone, especially if they have some snacks that they’re willing to share. Who wouldn’t want to lend sweet Cooper a treat or two with a face like his? 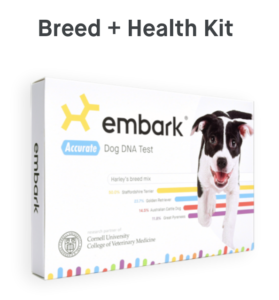 Judy was given an Embark Dog DNA Test for Christmas in 2016. Coincidentally, Pam was also given the test as a Christmas present, but two years later in 2018. Little did they know that when they found their Dog DNA kits under the tree, they’d also be finding the pup sibling of their furry family. Embark was also able to identify the fact that they shared the same home of Michigan state. The Embark Relative Finder tool was also able to compile some facts about Allie and Cooper to compare the personality of the sibling pups.

When the families were contacted by Embark with the news that their dog siblings had been found through their DNA results, both fur moms were thrilled. It didn’t take long for the parents to organize a reunion for the brother and sister pair. Allie and Cooper first reunited at Allie’s home. The two were on introduced on their respective leashes and did their sniffing with no excited or unexpected reactions to be seen. It appeared that the two pups were very comfortable with each other, as if they had never been separated before. After their initial introduction, the pups and their parents moved to a nearby park for some off-leash play. 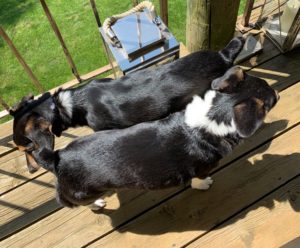 In this park, there is a tree dedicated to Judy’s late husband. His love for dogs is remembered through a sign listing all of the furry friends that had been in Dick’s four-legged pack, Allie included. Judy said that while at the park, Allie went right over to the tree, excited to show her brother, Cooper, her family’s special spot. 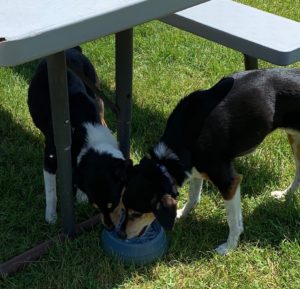 After sharing some water in the park, the doggos ended their pup-date at a nearby restaurant with outdoor seating. (Side note–we’d like to hang out with these pups and their parents — what a great way to spend an afternoon!). Allie and Cooper’s parents couldn’t believe how comfortable the pups were with each other after just one afternoon. While we at Embark can’t say for sure they remembered each other, we can say that these pups, reunited later in life, now have the opportunity to spend time together, play together, and we couldn’t be happier for all the pups and pup parents involved. Here’s to new furever friends, Allie and Cooper. 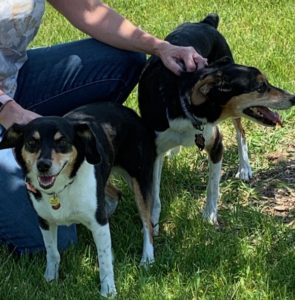 Can’t get enough of adorable reunion stories? Neither can we! Check out Wiley and Kaylee’s story. .

Has your pupper been Embarked, yet? Order yours today to see if your doggo has any furry relatives!

When the news arrived that dog DNA testing would be...

Embark has done it again! We found sibling pups in...