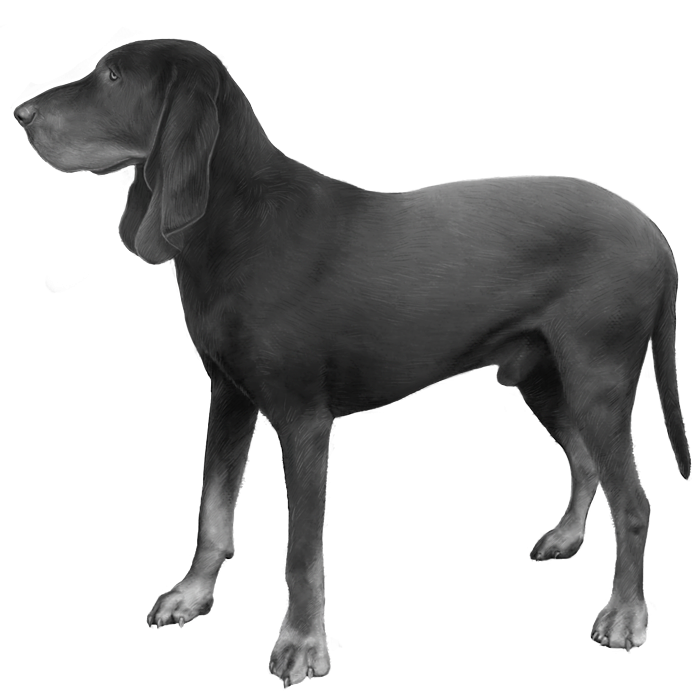 Black and Tan Coonhounds are amazing hunting dogs that were a great help to early American settlers. They can make good companions and family dogs with proper training. It is hard to say no to those huge floppy ears!

While there are many types of Coonhounds that originated in the United States, the Black and Tan Coonhound was the first to be recognized by the American Kennel Club.

Black and Tan Coonhounds are an American breed of dog that is the result of crossbreeding between Bloodhounds and the now virtually-unknown Black and Tan Virginia Foxhound. Developed and primarily found in the Southern United States, these dogs use their nose to track and “tree” raccoons, which still today is their prey of choice. Their name reflects their coat color, and Black and Tan Coonhounds still possess the pendulous ears and droopy face that they inherited from their Bloodhound forefathers. While they have been around for a couple hundred years, the American Kennel Club only recognized them in 1945.

While created to be hunting dogs, Black and Tan Coonhounds are now multi-purpose animals. They are kept as pets, used as hunting dogs, and participate in conformation shows. In the South, they are usually kept both as pets and hunting dogs; they relax on the couch all day and accompany their masters on raccoon hunts at night. They make excellent pets because they are very subdued in the house. As soon as they get outside, however, they are tireless and intense hunters. In fact, it is very important to train Black and Tan Coonhounds well and teach them to come when called—they are likely to wander off if poorly trained, especially if they smell something interesting.

Despite their history as hunting dogs, they do not require extensive amounts of exercise and will be happy with daily walks and the occasional romp in the park. Due to their large size and tendency to bark and howl, they are not a great choice for apartment or city dwellers; they are much better suited to suburban and country life.

Black and Tan Coonhounds do very well in homes with other dogs. In addition, their gentle nature makes them an excellent choice for families with children. They can also do well with cats, especially if they are familiarized with them as puppies.

Black and Tan Coonhounds are very popular in the United States, particularly in the South, and won’t be difficult to find. If they are to be kept primarily as pets, it is important to choose a breeder that breeds both for the home and for hunting.

Black and Tan Coonhounds on Embark