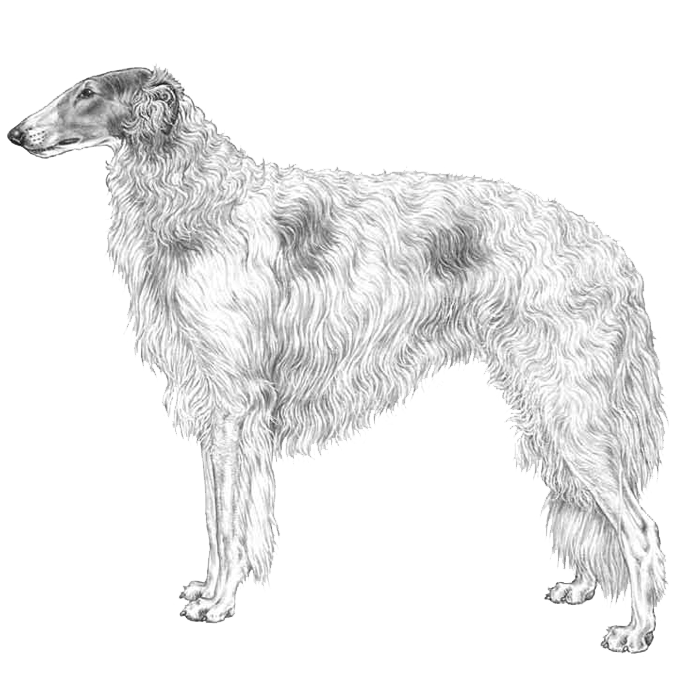 The Borzoi is a large, slender sighthound breed from Russia. Elegant and regal, they have powerful builds that enable them to hunt fast-moving animals like rabbits and foxes. Some of them were even used to hunt wolves in their homeland. Borzoi are affectionate dogs and true canine athletes who love to give chase. Because they’re built for speed, many excel at lure coursing.

With their long, slender frame and powerful build, one only has to look at a Borzoi to tell that the breed is built for speed. These dogs resemble large Greyhounds with a long coat and Roman nose. The breed’s name was changed to Borzoi (meaning “swift”) in 1936, but they used to be known as Russian Wolfhounds due to their history of hunting fast-moving quarry like wolves, rabbits, and foxes in their native Russia. The Borzoi originated during the Romanov rule in Russia, where they hunted in large packs. They nearly went extinct along with the Romanov family, but devotees recognized how special the Borzoi was and continued to breed them, even transporting them overseas to the United States and beyond.

All Borzoi should be at least 26 inches tall at the shoulders, with males even larger (most 28 inches or taller). Many weigh between 75-105 pounds. Despite the Borzoi’s large size, they are not generally disruptive or destructive in the home. They’re often serene dogs that are happy to have a soft spot on the couch. Borzoi can be easily differentiated from their smaller Greyhound cousins due to their long, silky coat, which can be straight, wavy, or even curly. They usually have profuse feathering on their legs and tail. Borzoi come in a variety of colors — in fact, none of them are disqualified in their AKC breed standard.

Like most sighthounds, the Borzoi usually has a considerable prey drive and will chase after small animals. They’re generally friendly or agreeable with other dogs in the home, but anyone thinking about adding a Borzoi to the family should be very careful when introducing them to cats or other animals. Borzoi should be polite and calm, and can be sensitive to changes in their environment or overly harsh correction during training. They can be a bit stubborn, but are often willing to humor their owners during training and do some of what’s asked of them. They’re generally a serene breed in the home, but they enjoy running and need an open, fenced in space to occasionally run around in. This is a breed that should never be allowed off leash, as they’re prone to take off after anything that moves and it can be very difficult to call them back to you. Many Borzoi enjoy participating in canine sports such as lure coursing, agility, or obedience.