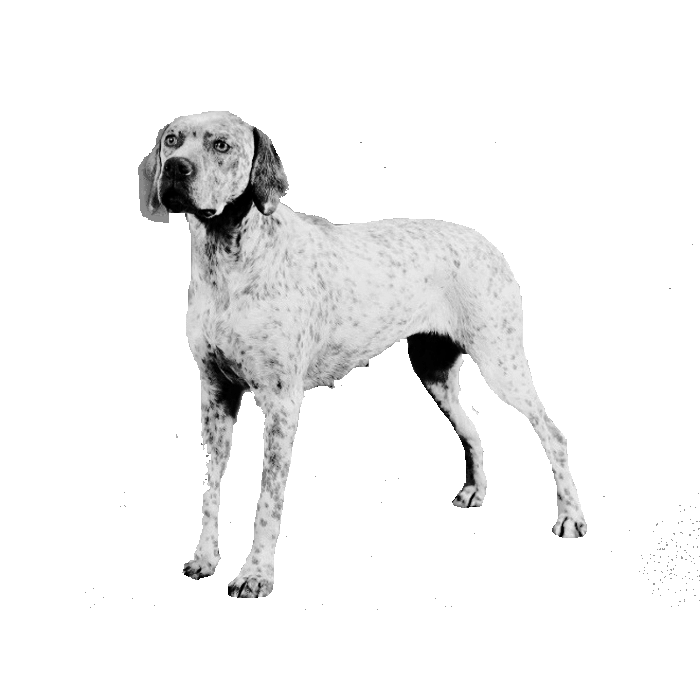 The Braque du Bourbonnais is a breed of gundog, of rustic appearance, sometimes born with a short tail, with a coat ticked with liver or fawn.

Unlike other dogs with such rich histories, the Braque du Bourbonnais has a bit of an odd story. After World War II, the breed was thought to be extinct after blood tests of various specimens in France turned up that they were actually just a bunch of similarly looking mixed breed dogs. A devotee of the breed, a man named Michel Comte, began looking for the dogs that contained the most Braque du Bourbonnais blood in the early 1970’s, and kept breeding them together to recreate the breed as a purebred dog again. Finally, after years of matchmaking and some collaboration with other breeders, the Braque du Bourbonnais was back on their feet as a breed. They were then imported to the United States, where their population grew and they were well known for being quick and intelligent hunting dogs.

Characteristic of the pointer type dogs, Braque du Bourbonnais are intelligent and have very good eyesight. They will “point” to whatever game their owner is chasing, with their nose and their forearm. This sort of collaborative hunting makes for a dog that is eager to please and sensitive to the needs and demands of their master. This eagerness to do a good job is translated over to other parts of their life, thus making Braque du Bourbonnais’ relatively easy to train.

Braque du Bourbonnais’ do best in homes where they can hunt or at least do a lot of outdoor activity. In fact, they are rarely kept as pets, despite their friendly and biddable disposition. They can make good house pets provided they are adequately trained as youngsters. They love children and other dogs, and can be trained to accept other pets (cats, etc.) as long as they are introduced to them young enough.

Braque du Bourbonnais are not ideal companions for apartment dwellers but can adapt if given adequate time outdoors. They will thrive in suburban or, even better, rural homes where they can fulfill their destiny as hunting companions. They are not super easy to find in the United States, as they are still a relatively rare breed, and should not be mistaken for other dogs that look like them (other types of pointers, for example).