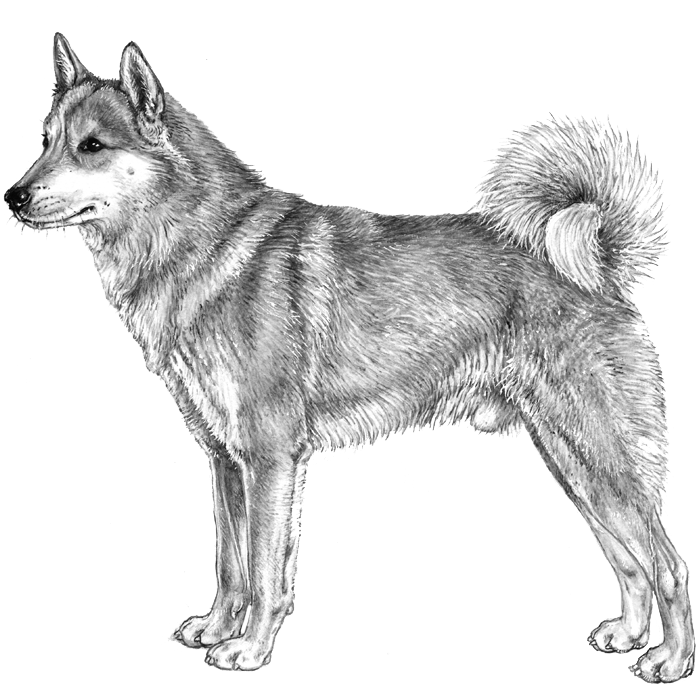 Tenacious, brave, and independent, the West Siberian Laika is a high energy breed that bonds deeply with its owner.

The West Siberian Laika is a cousin breed of the Siberian Husky. Though artificial selection occurred to standardize the Laika breed, genetic diversity was remarkably retained. As a result, the Laika breed is notably healthy with few documented genetic disorders.

West Siberian Laika dogs are medium-sized, and commonly wolf-colored. The most defining physical characteristic of the breed is the strong, curly tail they carry high upon their backs. Bred in the frigid Russian territory of West Siberia, the breed was crafted for its exceptional game hunting skills throughout the 20th century.

The Laika name means “barking dog”, an apt description of the bark-pointing this dog is famous for after cornering or chasing game into a tree. These tenacious, brave, and independent dogs require much stimulation, greatly preferring running through the woods over sitting in the house. Exercise is an absolute must for the Laika’s happiness. With their exceptional senses and active nature, these dogs also make keen watchdogs.

Laikas form deep bonds with their owner and family, and do not transfer to a new owner well. Though careful with children, supervision with young ones is advisable. The Laika may be aggressive to new dogs without a proper introduction, especially those of the same sex. Additionally, their strong prey instincts may cause problems with other pets like cats and rabbits. Early socialization with people and other animals, as well as obedience training are crucial.