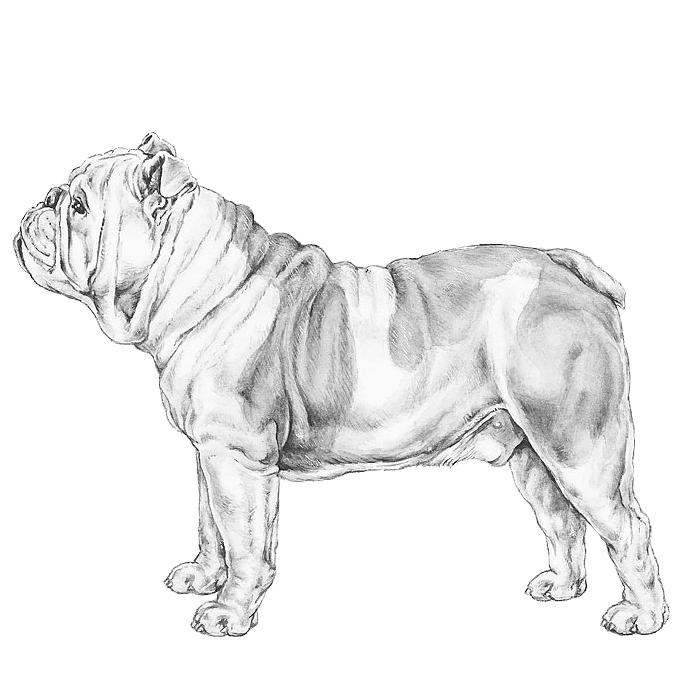 Originally a bull-baiting dog, bulldogs today are gentle and loving while still carrying the stocky frame of their forbearers.

Historically, it was thought the original old English Bulldog was crossed with the Pug. However, current genetic analysis of purebred dogs proves this to be false.

The English Bulldog has characteristically wide head and shoulders, a short muzzle, and a pronounced underbite. Along with his round, black, wide-set eyes and drooping lips, characteristic nose folds called a “rope” or “nose roll” are a signature feature of the breed. These should be monitored and cleaned regularly to avoid infections caused by moisture accumulation.
The coat is short, flat, and sleek, with accepted colors that range from solid red and fawn to black and tan to piebald.
Like all dogs, Bulldogs require daily exercise. However, like other brachycephalic breeds, English Bulldogs can suffer from Brachycephalic Upper Airway Syndrome. The small nostrils, elongated soft palate, and increased upper airway resistance associated with this syndrome can lead to difficulty breathing and keeping cool. As such, extra caution should be practiced with English Bulldogs in warm climates and during summer months.

Today’s Bulldog no longer performs the formidable job he was originally bred to do, bull baiting. However, he is still prized for his endearing appearance and personality and makes a capable guard and family companion.