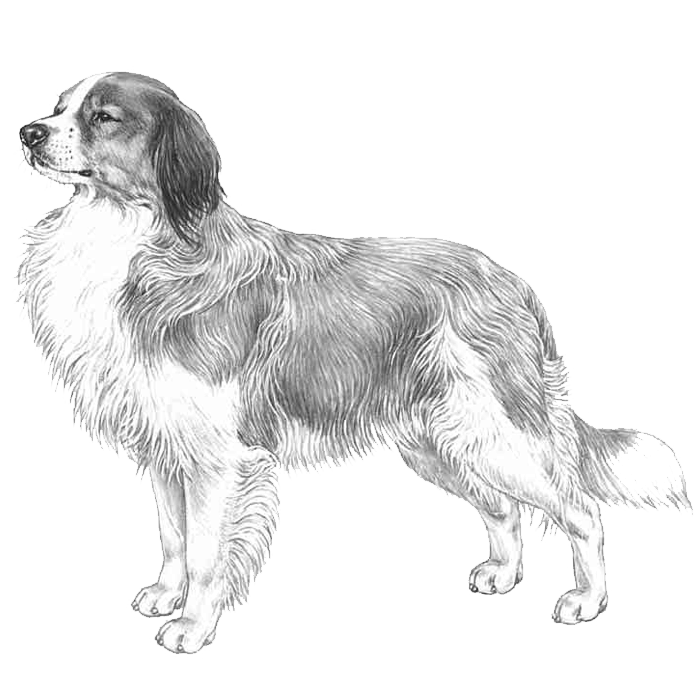 Even though the Kooikerhondje breed is not recognized in Canada, it is rumored that they were instrumental in creating one of Canada’s only native dog breeds: the Nova Scotia Duck Tolling Retriever.

Developed in the 16th century, Kooikerhondjes were very popular both as hunting dogs and as companion animals. As hunting dogs, they have an unusual hunting technique: The Kooikerhondjes would use their long and feathered tails to attract the ducks and lead them to cages placed by the hunters. As companions, the Dutch nobility historically kept them as pets. Paintings from the 1600s often feature Kooikerhondjes sitting quietly with children or at the feet of their master. Despite their long-lived popularity, the Dutch Kennel Club only officially recognized them in the 1970s—they underwent an astonishing recovery after nearly becoming extinct during World War II.

Today, Kooikerhondjes are rarely used on the hunt and have instead become well known for being lovely and intelligent house pets. They need exercise, but when in the house they are content to curl up at the side of their beloved master. They are not overtly friendly with strangers and can be standoffish until they get to know them better. Once their trust has been gained, however, Kooikerhondjes are exceptionally loving dogs.

Kooikerhondjes can make good apartment dogs, but like all sporting breeds require a decent amount of exercise. If given enough time to burn off their energy, Kooikerhondjes can adapt well to apartment life, as they are not particularly large dogs. They will also do very well in a suburban or rural home, especially if they have a safe, fenced in yard. Their gentle and affectionate personalities make them suitable to families with children, and they do well with other dogs and small mammals if they are socialized with them early on.

Kooikerhondjes do not enjoy much popularity outside of their native Netherlands, though they certainly should. Because of their relative rarity, they might not be too easy to find, and prospective owners may have to do a bit of searching to find a breeder. Fortunately, Kooikerhondjes make wonderful family pets and will bring any family that welcomes them a lot of joy.