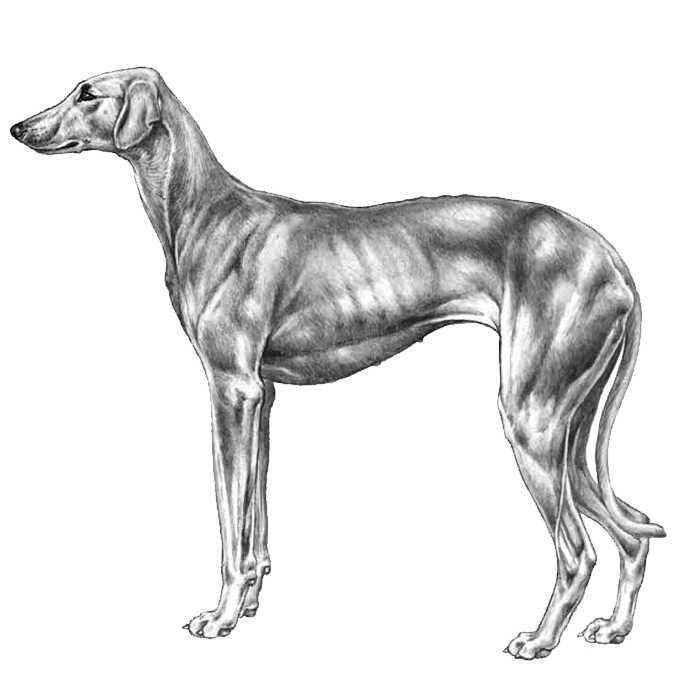 This North African sighthound breed is cherished for its hunting ability, speed, and endurance across difficult terrain. The Sloughi comes in many colors and shares its slender shape with other breeds in the sighthound family.

Sloughis are amazing jumpers. If owners think they’re safe leaving their Sloughi in the backyard because their yard is fenced in, think again! The fence should be at least 6 feet high, or else their Sloughi will be able to jump clear over it.

The Sloughi is a sleek hound that hails from North Africa. Though mainly found in Morocco, they can also be found in countries like Tunisia and Libya.

Sloughis are an exceptionally ancient breed of dog and have changed very little over thousands of years. Drawings of dogs that look like Sloughis have been found all over North Africa, which testifies to the breed’s ancient origins. It is likely that they originated farther south than Morocco, perhaps in Ethiopia. Another possibility is that they are originally Egyptian dogs—etchings found in ancient Egyptian ruins provide ample proof for this theory. They are genetically unique but are related to other similar dogs such as the Basenji. Although they are similar-looking to Middle Eastern breeds, such as the Saluki, they are not genetically close to them.

Sloughis were bred to hunt medium to large game, such as boars and gazelles. They are extremely agile and fast, and they are able to run long distances with exceptional endurance. They are intuitive and soulful dogs that require gentle handling and a sensitive master. Sloughis won’t react well to harsh tactics while being trained, and owners will have much more luck if they are consistent and patient with them.

Sloughis are still a relatively rare breed in the United States. In fact, the American Kennel Club only recognized them in 2016. Despite their size (they are tall but not at all heavy, similar to a greyhound) they are suited for apartment, suburban, and rural life. Much like other tall sighthounds, they are fast and hardworking when required, but they are also happy to curl up in the living room and relax. They do well with other dogs and most children, but they should be socialized early to both as they can be territorial. Owners might want to consider another breed if they have small pets, such as cats or rodents, as Sloughis might not be able to tell the difference between prey and family member. As long as Sloughis are introduced early to cats, owners may not have any problems, but it is something to be aware of when considering adding a Sloughi to the family.

Sloughis have unique personalities, though. If prospective owners are looking for a carefree and whimsical dog, they should look elsewhere. Sloughis are very dignified and occasionally aloof—they emit a quiet solemnity and sense of self-possession. While they are often distrustful of strangers, they are loyal and loving with their family.

Salukis are very fast, very ancient dogs. Some believe they were the first domesticated breed. Salukis are sighthounds, but today they are mainly companion dogs. Today, this is a particularly rare breed.