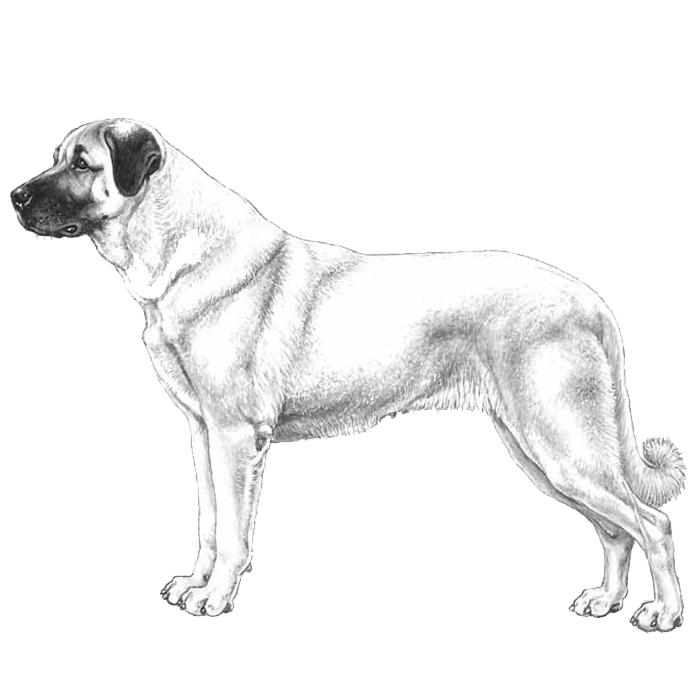 The Anatolian Shepherd Dog is a native of Turkey, where he was developed as a shepherd’s companion and livestock guardian. He was bred to resemble the size and color of the livestock he defended so predators would not detect him among the flock. Sometimes called the Anatolian Karabash Dog, he’s a fiercely loyal guard dog and a large, impressive dog breed, weighing 120 to 150 pounds at maturity.

Despite having originated in totally different parts of the world, Anatolian Shepherd Dogs and Alaskan Huskies have been shown to share DNA. How this ended up happening is a mystery, but it could be the result of a long ago common ancestor.

For much of their history, Anatolian Shepherd Dogs remained rather undefined. Because rural families in Turkey primarily owned them, people weren’t too concerned with their appearance. Mostly, owners were interested in how intelligent and powerful they were and how well they could guard the homestead and the livestock. Anatolian Shepherd Dogs are known for protecting sheep from truly powerful animals, such as bears, lions, and tigers. It was only in the 1970s, when the Western world became interested, that Anatolian Shepherd Dogs were more rigidly defined and gained a breed standard.

Anatolian Shepherd Dogs are still mostly used as working dogs. Because they often worked alone and protected livestock without much human intervention or direction, they tend to be very independent dogs and, thus, don’t always make great pets. People wanting to make companions out of Anatolian Shepherd Dogs will need to engage them in extensive training and socialization from puppyhood. While they are loyal to their masters, they aren’t cuddly, and they are so accustomed to relying on their own wits and judgment to get tasks done that they can be tricky to train. In addition, Anatolian Shepherd Dogs don’t make good apartment or suburban dogs—they are much better suited to rural life.

Anatolian Shepherd Dogs do well with other animals, including smaller animals, provided they are socialized with them from an early age. This is important for any breed of dog, but especially crucial for Anatolian Shepherd Dogs who normally have contact with the livestock they protect and their predators. They do very well with children and will protect and dote on them.

Anatolian Shepherd Dogs are not popular in the United States, but they are slowly gaining traction. They will make a great addition to a rural family provided they have a job to do and the master has enough time and patience to train them properly.