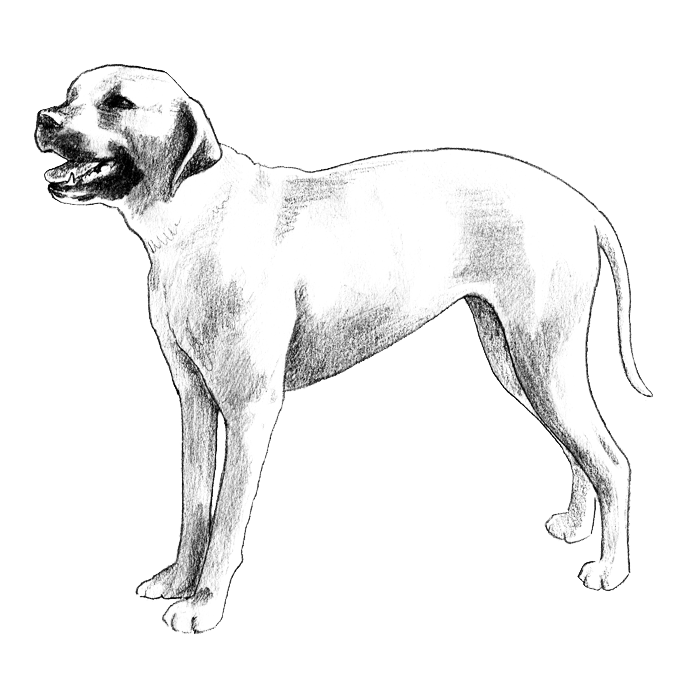 Mountain Curs were well loved and very popular with some of the earliest American colonizers. They were great hunters and protectors, which made them indispensable to their owners.

Mountain Curs are an American breed of treeing hound. Developed in the South—particularly Kentucky, Virginia, and Tennessee—they’re an all-American dog breed that has been prized for years as excellent hunting companions and loyal pets.

Mountain Curs are often considered to be good family dogs and friendly with people they know, as long as they’re well socialized. They can become very protective and possessive of their family, making them good guard dogs. They can be suspicious of strangers and should be carefully introduced to new people.

If you’re considering bringing this breed into your home or you’ve recently discovered your dog is mixed with Mountain Cur, we have all the information you need to make informed decisions regarding their care. We’ve included details about this breed’s physical characteristics, playtime needs, grooming tips, nutrition, and more. You’ll also find a list of all the health conditions we test for here at Embark that are particularly relevant for this breed.

Mountain Curs are not as old as some of their American counterparts. While it is likely that they have been around for at least a couple hundred years, the breed association for Mountain Curs wasn’t formed until 1957, when the Original Mountain Cur Breeds of America (OMCBA) was established. They weren’t recognized by the United Kennel Club until the late 1990s.

Mountain Curs were brought over by European immigrants who settled in the mountainous Appalachian regions of the United States, where they were used primarily as hunting dogs. They are especially good at “treeing”, which is a technique used mostly while hunting raccoons: The dog chases the animal up a tree and alerts the hunter to its whereabouts. While Mountain Curs were relatively rare by World War II, they made a comeback in the 1950s.

The Mountain Cur is currently recognized by the following organizations:

These stocky dogs can come in a variety of colors and patterns. The American Kennel Club (AKC) recognizes the following colors and markings:

Like any dog, a Mountain Cur needs a healthy, high-quality diet to thrive. Store-bought pet food should be chosen based on their stage of life (puppy, adult, or senior). Special attention should be given to the AAFCO statement on the bag, which should state the diet is “complete and balanced”.  This statement means that the food company has met or exceeded nutritional adequacy standards established by the Association of American Feed Control Officials (AAFCO).

Mountain Curs require a diet that’s high in protein to fuel their energetic lifestyle. Their meals should also contain plenty of carbohydrates and healthy fats to meet their energy needs. Pet parents wanting to feed their dog a raw diet or cooked human foods should consult with a veterinarian or dog nutritionist first.

Mountain Curs have a short-haired double coat. The topcoat protects their skin during the summer, while their undercoat keeps them insulated and warm in the colder months.

Nail trims and ear cleaning should be done as needed.

Mountain Curs with other pets

Mountain Curs are good with other dogs—a necessity because they were often kept in groups—and are good with larger animals, such as horses and livestock. Because of their high prey drive, they really shouldn’t be trusted with cats or other small pets unless they are socialized with them from a young age.

This breed requires a lot of exercise and playtime every day. The best home for a Mountain Cur is one with a lot of space to run. They aren’t recommended for apartment living and can be destructive if they’re cooped up for too long. Mountain Curs love being outdoors, and if not used for hunting, they can be great agility competition dogs.

Mountain Curs are easily trained and love having a job to do. These clever canines generally find basic commands easy to learn. They enjoy being challenged and are eager to learn more complicated commands. It’s important that they start training at a young age. Due to this kind of dog’s high intelligence, they can easily take advantage of a pup parent that is too easygoing.

Mountain Curs respond best to positive reinforcement and reward training. Since these dogs like being active, rewards don’t necessarily need to be food-based. Praise and play are great rewards for this breed as well.

Health and aging in Mountain Curs

The average lifespan of a Mountain Cur can range from 10 to 13 years. They’re known to be a generally healthy breed with few health concerns.

Do you own a Mountain Cur or do you think your dog might be part Mountain Cur? Learn more about your dog with Embark’s Dog DNA Tests, the most accurate on the market.

teddy roosevelt terrier your dog has a high chance of low alt. should you worry? plott windsprite sheepadoodle can we guess what type of dog you have? 7 benefits of fostering a dog l 2 hydroxyglutaricaciduria, l2hga top winter accessories to keep your dog warm what your dog's poop can tell you