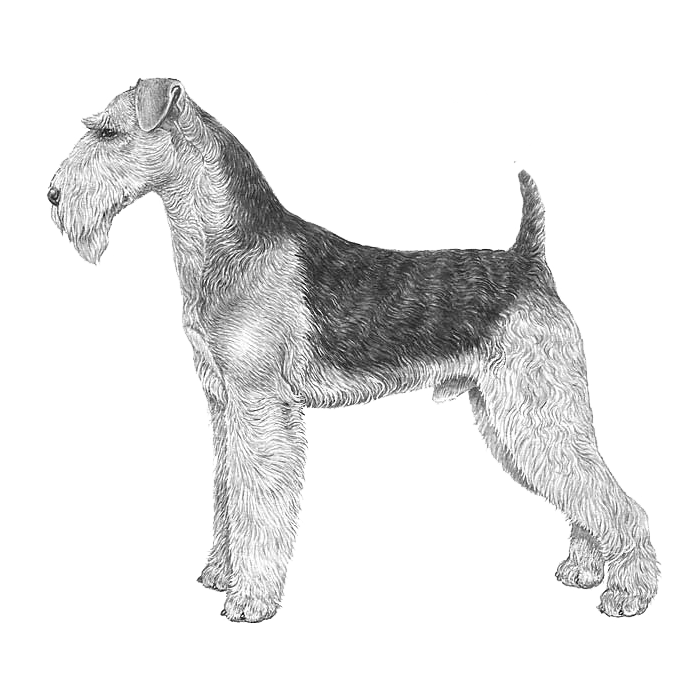 The Airedale Terrier earned its nickname of the “king of terriers” by being the largest terrier breed. This breed’s dignified beard and mustache give it a regal expression. For the right owner, the Airedale Terrier makes a versatile, intelligent, and determined companion or working dog. They are an active breed and will shine in canine sports, work, or as a jogging partner.

During World War I, Airedale Terriers were employed as messengers to deliver information past enemy lines. They were also used by the Red Cross to help wounded soldiers. This gave the breed a heroic status and contributed to their meteoric rise to the most popular dog breed in the United States during the 1920s.

The words “regal” and “dignified” come to mind when most people think of the Airedale Terrier. It’s no surprise that with their characteristic beard and large size, they earned their nickname as the “king of terriers”. In fact, the Airedale is the largest terrier breed. This makes them a reliable and versatile working dog as well as an active companion. The breed’s name is derived from the Aire Valley north of England, close to the Scottish border. Originally bred as dauntless duck and rat hunters, the Airedale Terrier counts among its foundational ancestry the Otterhound and now-extinct English Black and Tan Terrier, among other breeds such as retrievers. As the Airedale continued to be bred, owners realized how versatile the breed was and began to use it for hunting of gamebirds, protection, K9 work, and more. They were even utilized as fearless messengers during World War I.

While there is some variation in the Airedale’s size, the AKC breed standard dictates that they should measure 23 inches from the shoulder, with females being slightly shorter. The breed is strong and muscular, but elegant and balanced. They have a wiry, weather-resistant coat that comes in black & tan and grizzle & tan. Airedale puppies have more black hairs in their coats, but the black eventually recedes into a saddle shape on the dog’s back as it matures — this is due to a trait called “saddle tan” associated with the RALY gene, which Embark tests for.

It should come as no surprise to terrier aficionados that the Airedale is extremely stubborn and determined. This is a highly courageous breed that needs firm, consistent training. They’re very bright and need to be engaged mentally, but they often have their own ideas and opinions about what they’d like to do. Like other terriers, the Airedale can also be prone to digging, chasing small animals, and destructive chewing when bored. It’s important that Airedales be given a lot of physical and mental exercise to keep them healthy and happy. While this breed is often considered a working dog due to its versatility, Airedales can also make great pets when kept busy with canine sports or regular brisk walks or runs.