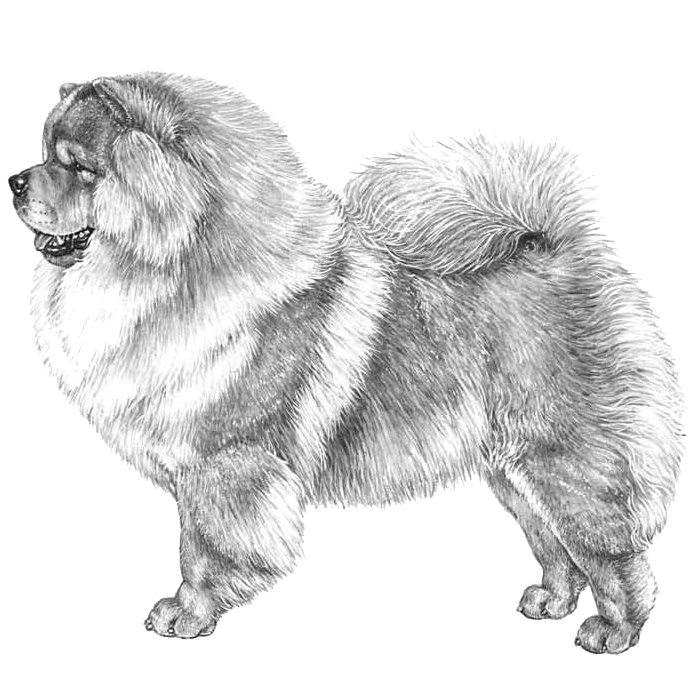 This distinctive-looking dog breed has a proud, independent spirit that some describe as catlike. They can be aloof and shy around strangers. The Chow Chow may not be a cuddle buddy, but for the right person, they are a fiercely loyal companion.

A blue tongue and lips aren’t the only unique things about the Chow Chow's appearence. Did you know that the blue-coated Chow usually has a blue or gray nose?

Chow Chows at a glance

The Chow Chow dog breed, or Chow, is typically known for its blue-black tongue and lips. The only other breed required to have this uniquely-colored tongue, according to the breed standard, is the Chinese Shar-pei.

This breed stands high at nearly 20 inches. Known for their recognizable lion mane, they can have rough and smooth coats. Their fluffy coat colors include red, black, cinnamon, and cream-colored. Some owners mention that Chow Chows don’t require a great deal of exercise and are incredibly well-mannered.

Chow Chows have several distinguishing features, including an extra pair of teeth (44 instead of 42), an unusual blue-black/purple tongue, and straight hind legs, resulting in a somewhat stilted gait.

About the Chow Chow

The Chow Chow’s name in Chinese is actually Songshi Quan, often translated as “puffy lion dog.” This all-purpose dog was used for hunting, herding, pulling, and protection of the home.

This ancient dog breed probably originated in Mongolia or Siberia before traveling to northern China thousands of years ago. It may have appeared in art there over 2000 years ago as a hunting dog. In China, it is referred to as Songshi Quan, which means “puffy-lion dog”. The breed has also been called the Tang Quan, “Dog of the Tang Empire,” perhaps because one Emperor owned over 5,000 Chows.

According to BMC Genomics, this breed often appears as a symbol similar to the traditional stone guardians found in front of Buddhist temples and palaces in Chinese history. It is one of the few ancient dog breeds still in existence in the world today.

Distinctive traits for this breed

Coat: There are two varieties: rough-coated with an immensely thick, upstanding coat and smooth-coated with short, dense hair. The coat colors include black, blue, red, cream, and cinnamon.

Tail and ears: They have small, thick, rounded, and erect ears. Their tail curls over the back.

Embark recommends testing Chow Chow dogs for certain genetic health risks, while others are tests whose results are registerable with the OFA for this breed.

Other health issues related to this dog breed

The Chow breed can be prone to certain health conditions, including:

How to care for this breed

Nutrition: Obesity can be an issue with a large number of dog breeds. The Chow is no different. Pet owners must keep their dog at an appropriate weight to extend its life.

Grooming: When you’re teaching your Chow Chow puppy to lie down for grooming and nail trims always use a high-value food item and perhaps a clicker. This kind of breed often responds well to clicker training and positive reinforcement techniques such as play, praise, and food rewards. Grooming requirements depend on the type of coat. A smooth-coated Chow needs brushing once a week and a rough coat Chow should be brushed every other day.

Playtime: Nosework would be a wonderful way to burn some of your Chow’s energy given its strong scenting ability and history of hunting game birds.

Why does the Chow Chow breed show up in many mixed breeds?

If you’ve recently gotten DNA test results for your mixed breed dog, you may be surprised to learn that they’re part Chow Chow. You’re not alone!

Many owners are surprised to learn their dog has some Chow Chow ancestry. Why are Chows common in mixed breeds and uncommon as purebreds? Learn more about this common breed result from Embark’s Chief Science Officer, Adam Boyko.

Learn more about your dog — from breed, to health, to coat patterns, and more. Try Embark’s Dog DNA Tests, the most accurate canine DNA kit on the market.