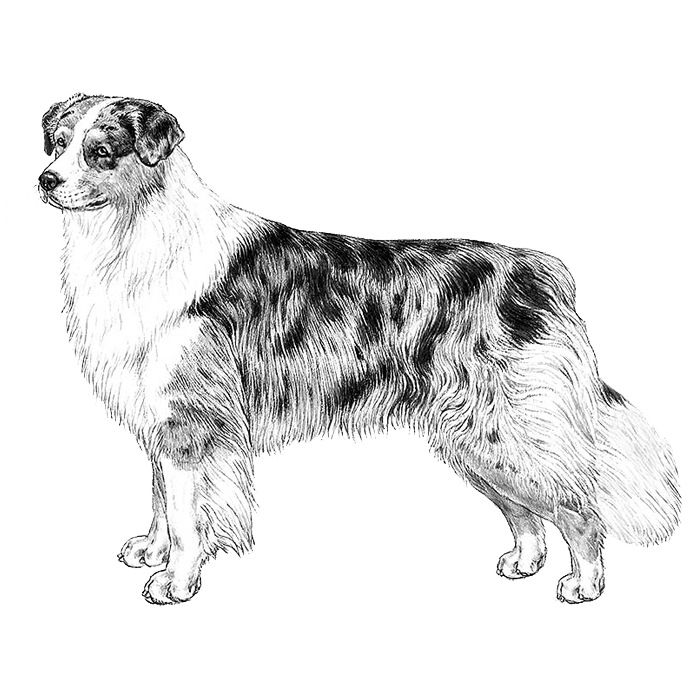 Australian Shepherds are an energetic mid-sized breed that make the perfect companion.

Australian Shepherds rose to popularity and fame as rodeo stars. After the first World War, people flocked to the west and to watch exhibitions that showcased these very talented canines.

Australian Shepherds at a glance

Australian Shepherd dog breed — often called Aussies — have considerable energy and they usually need a job to do to keep themselves entertained, though they’re also happy to spend time with the family and settle down at the end of the day. Australian Shepherds are often employed as guide dogs, rescue dogs, and therapy dogs. In addition to exercising an Aussie, it’s equally important to keep their mind occupied. If this breed gets bored they do have the tendency to invent their own games or activities, which sometimes involve destructive behaviors. This kind of dog also often thrives on close companionship. Aussies are at times called “Velcro Dogs” for their tendency to stay close to their owner.

Australian Shepherds are easygoing and playful dogs. Whether you just welcomed one into your home or are thinking about it, you’ve come to the right place. This guide to Australian Shepherds will provide all the information you need to properly train and care for your pup, as well as a list of the health risks Embark tests for that are most relevant for this breed.

Despite their name, the Australian Shepherd actually originated from the ranches of the United States around the 1800s. They are praised by stockmen and breeders for their trainability and intelligence. They have a medium build and a wide variation of different coat colors.

According to the American Kennel Club (AKC), “The Australian Shepherd, a lean, tough ranch dog, is one of those ‘only in America’ stories: a European breed perfected in California by way of Australia. Fixtures on the rodeo circuit, they are closely associated with the cowboy life.”

In terms of physical characteristics, Australian Shepherds typically have strong, balanced frames. They have slightly domed heads, medium-sized muzzles, and almond-shaped eyes that can be blue, brown, or amber. A medium-length and water-resistant lush coat helps keep the Australian Shepherd comfortable in the rain and snow, but those living in warmer climates can have a lighter undercoat.

A straight and wavy coat covers most of this breed’s body and comes in several colors, including blue merle, black, tri-color, red, and red merle.

“The Australian Shepherd, the cowboy’s herding dog of choice, is a medium-sized worker with a keen, penetrating gaze in the eye,” the AKC reports. “In all ways, they’re the picture of rugged and agile movers of stock.”

A balanced diet is vital to your dog’s growth and health, according to the ASPCA, and portion control is key. It’s okay to give your dog commercial pet foods, just be sure to read the label and ensure that what you’re buying is based on your dog’s caloric needs. “Barring any special needs, illness-related deficiencies, or instructions from your vet, your pet should be able to get all the nutrients he or she needs from high-quality commercial pet foods, which are specially formulated with these standards in mind,” the ASPCA reported.

On average, Australian Shepherds need 30 to 60 minutes of exercise a day. The best exercise for this breed of dog is high-energy activities like playing with a Frisbee or agility exercises. They are busy dogs and need regular mental and physical stimulation. Puzzle toys are a great way to keep their minds exercised when they’re not on the move.

“Once an Aussie leaves puppyhood behind, and his skeletal system is fully formed, he can make a great running companion,” the AKC reported. “The best course, however, is to give the Aussie a job, whether that is herding livestock, shepherding children, or competing in canine events such as obedience, herding or agility trials, or dock diving.”

Australian Shepherd puppies do not need as much exercise as the adults and should not run on hard surfaces or engage in a lot of jumping until they are at least one year old.

Australian Shepherds respond well to training methods that are based on positive reinforcement. They need rewards such as food, praise, and play and need to establish focus first in order to successfully take training cues. Obedience class can help train and curb the Australian Shepherd’s tendency to herd all the time. With proper training, they will soon learn that it is bad manners to herd humans and other pets.

The Australian Shepherd has a lot of hair, which may make you nervous about grooming. However, all you really need to do is brush their coats on a regular basis.

“The Aussie sheds, but it’s a major event only twice a year, in the spring and fall. Frequent brushing, warm baths and thorough blow drying during that time will help keep the handfuls of hair under control. Outside of shedding season, bathe the Aussie only when he gets dirty,” according to Vetstreet.

While they often wear their nails down while walking outside or playing, it’s still important to check their nails to see if they need to be trimmed. It’s also vital to keep their teeth and ears clean.

The Australian Shepherd has a lifespan of about 12-15 years, according to Dogtime. Your dog is considered a senior pup after turning 8. Make sure you’ve had your pup tested with Embark so you’re armed with as much information as possible to ensure your dog is healthy and to sidestep any preventable disease that may come your way.

Do you own an Australian Shepherd or do you think your dog might be part Aussie? Learn more about your dog with Embark’s Dog DNA Tests, the most accurate on the market.

A Guide to Australian Shepherds