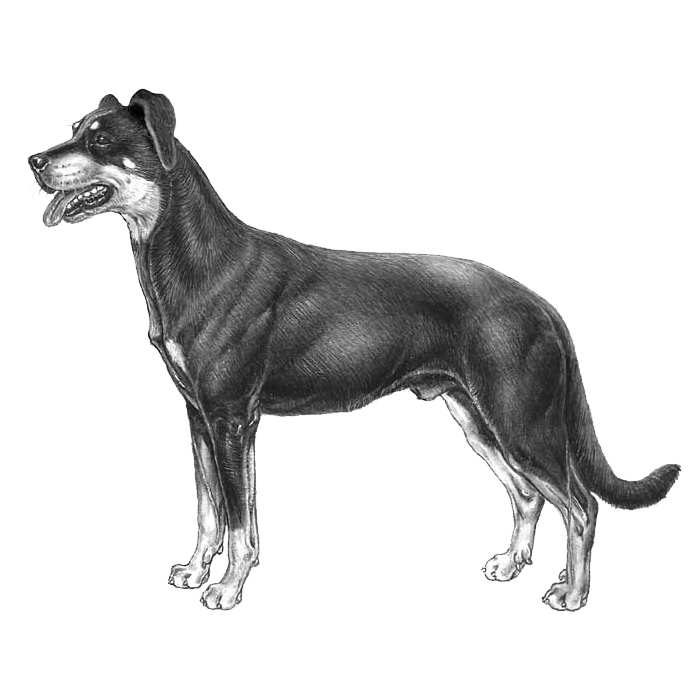 The Beauceron is a large purebred known for being courageous, friendly, intelligent, loyal, and protective. The most common colors for Beaucerons are black, black and tan, and gray. To keep it healthy, it will need to get exercise regularly. Known to be multi-talented, the Beauceron participates in a wide variety of activities such as agility, competitive obedience, guarding, herding, military work, police work, schutzhund, and tracking.

A brave Beauceron named O'Cara Bleue de St Sacrement received a medal in commendation of her heroic acts and bravery for conducting extensive search & rescue efforts (with a special camera around her neck to detect any signs of life) in the aftermath of the 2001 World Trade Center terrorist attacks.

The Beauceron is a confident, steady-tempered, usually serious dog. Athletic and agile, this breed needs hard exercise (running, hiking, biking, fetching). A walk around the block is most assuredly not enough. Mental exercise (advanced obedience, agility, herding, Schutzhund) is just as important to this highly intelligent breed. Matching his stern appearance, he is aloof and discriminating with strangers, keen-eyed and watchful. Socialization must be early and frequent so that his watchfulness doesn’t shade into aggression. Most Beaucerons are territorial with other animals, but usually good with the pets in their own family, if raised with them. Beaucerons like to control everyone and everything and require a confident, consistent owner who knows how to lead.

The Beauceron works as a flock guard in open areas protecting sheep along with other livestock. The breed was also used in the military. Ignoring exploding bombs or artillery fire, the dogs were used to run messages, detect mines, pick up trails, support commando actions, find the wounded, and carry food and ammunition to the front lines. The Beauceron, like many sheep herding breeds, is easy to train for tasks beyond care of the flock or herd. His calmness and ability to follow commands without hesitation was well illustrated during both major wars in Europe. Today this serious working dog is still used as a herder, a guard dog and by the French police and army.

The Beauceron is a “mouthy” dog. Be sure you have plenty of tough toys on hand for him to carry around and chew on. The Beauceron is not an appropriate choice for a first-time dog owner, as this breed needs a firm hand to ensure appropriate maturation (which happens slowly) – Baucerons are puppy-like until about 3 years old. A bored Beauceron is a destructive Beauceron. Be prepared for him to push back when you ask him to do something, testing whether you really mean what you say. It’s essential to be firm, fair, and consistent. Never respond with harsh treatment or force.