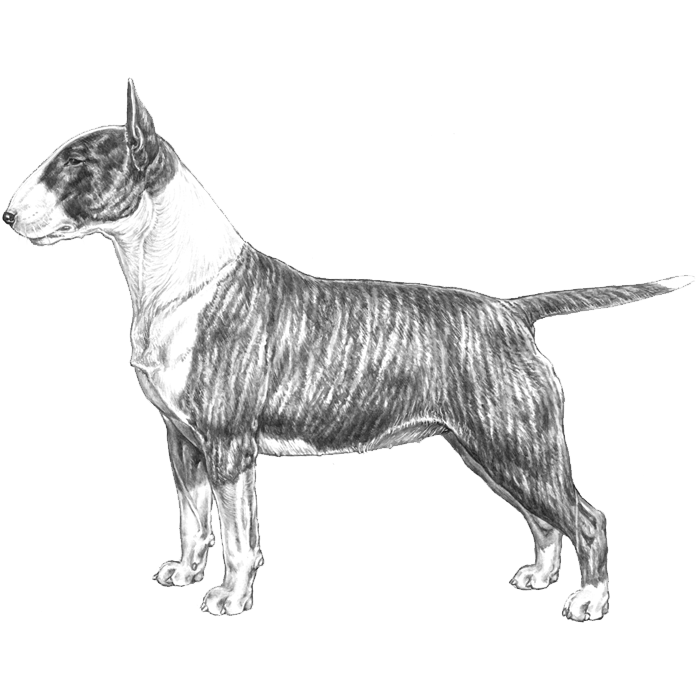 Also known as the English Bull Terrier / Bully / Gladiator, the Bull Terrier was originally developed in the 19th century as a fighting dog and, later, a fashionable companion for gentlemen, but these days he’s a family companion and show dog. He’s a dog breed distinguished by his long, egg-shaped head. Most people know this breed as the mascot for Target, Bullseye.

Bull Terriers do not bark unless there is a reason. So, when they do bark, pay attention.

The Bull Terrier is a breed of dog in the terrier family. There is also a miniature version of this breed which is officially known as the Miniature Bull Terrier. The Bull Terrier’s most recognizable feature is its head, described as ‘egg-shaped’ when viewed from the front; the top of the skull is almost flat.

Bull Terriers can be both independent and stubborn and for this reason are not considered suitable for an inexperienced dog owner. A Bull terrier has an even temperament and is amenable to discipline. Although obstinate, they are particularly good with people. Early socialization will ensure that the dog will get along with other dogs and animals. Their personality is described as courageous, full of spirit, with a fun-loving attitude, a children-loving dog and a perfect family member. A 2008 study in Germany shows that Bull terriers have no significant temperament difference from Golden retrievers in overall temperament researches.