Skip to contentSkip to footer

Coat color genetics can be fun and interesting at the same time.

This is because there seems to be an exception to every rule, and the veterinary genetics community still has a lot to discover about coat color. Learning about the inheritance of coat colors can be incredibly rewarding as it is an opportunity to see the power and influence of genetics in “real time”, creating a visual model to better understand the genetics of health disorders and breed-specific traits.

Embark hopes to make coat color easier to understand by providing this blog post and handy infographic. If you would like additional help, you can contact a member of the Embark team at breeders@embarkvet.com.

Locus: The specific physical location of a gene on a chromosome (plural loci)

Genotype: The combination of alleles that a dog has at a particular locus

Phenotype: The physical appearance impacted by the genotype and/or environment

Recessive: Two copies of an allele are needed to express the phenotype (a recessive allele is hidden in heterozygous dogs)

Dominant: Only one copy of an allele is needed to express the phenotype (a dominant allele will hide the other allele if the dog is a heterozygote)

Phaeomelanin is a reddish-yellow pigment produced in the coat. It does not occur in the eyes or the nose; only eumelanin occurs in those areas so only genes that affect eumelanin can affect their color. You will learn more about phaeomelanin when we discuss the E locus.

The E locus (MC1R) has 4 alleles which can be reported: Em, Eg, E, and e, and it has a hierarchical dominance pattern. Em (melanistic or dark mask) is at the top and is dominant to the other E alleles. This is the characteristic facial mask seen in the German Shepherd Dog and Pug. Eg (grizzle) is next in line and looks like the widow’s peak of the Afghan. The physical visibility of the mask or grizzle is dependent on the genotypes at the K and A loci. For example, in order for grizzle to be seen phenotypically, a dog must also have the genotype kyky at the K locus and atat at the A locus. In theory, a dog could also be ata, however, the a allele has not been documented in breeds with visible grizzle.

The E allele provides the ability to make eumelanin in the coat and is dominant to the e allele (recessive red). Dogs that are EE or Ee can produce dark (black, brown, blue, isabella) hairs, but their distribution will be dependent on the genotypes at the K and A loci. Dogs that are ee (recessive red) will not produce any dark hairs regardless of their genotype at the K, A, B, and D loci. (Interestingly, you can usually tell what their genotype is at the B and D loci by the color of their nose.) The shade of red of their coat can range from a deep copper like the Irish Setter, to yellow like a Labrador Retriever, to the white of Samoyeds. This variation in red color intensity is controlled by multiple genetic loci and has different genetic determinants in different breeds. Embark is working on defining the genetics behind red color intensity, and you can help by providing high-quality images of your ee dogs within their profiles.

The two reported alleles at the K locus (CBD103) are KB and ky. Embark does not report brindle (sometimes abbreviated as Kbr), because currently there is insufficient evidence supporting the genetics of brindle for Embark to accurately report. KB is dominant to ky. This means only one copy of KB is needed for the coat color to be expressed. We use the term dominant black for KB. If a dog has at least one KB allele, you can completely ignore the A locus regarding that dog’s phenotype. In a breeding animal, it may be important to know the A genotype, however. If a dog is kyky (and not ee), then the A locus will be expressed as follows:

For an example using the standard hierarchy above, a dog that is ayaw or ayat will be fawn/sable, and only a dog that is atat or ata will be black and tan. It has been thought that the alleles are not additive and an awat dog and an awaw dog will both be the same degree of wolf sable, however feedback from many breeders suggests that there may be breed-dependent interaction of the A alleles. There are also several different coat patterns for fawn/sable dogs which goes beyond the scope of this post. Just like with the K locus, both alleles may be important to record to know what your breeding dog may produce.

The B locus (TYRP1) will determine if black pigment in the coat, nose, paw pads, and eyes is lightened to brown pigment. Brown, chocolate, or liver all refer to the same genotype (bb) and have a breed-specific phenotypic terminology preference. The genotype at the B locus affects any black hairs regardless of the allele causing them, and a bb dog’s eyes will likely become amber or copper. While there are a variety of recessive b alleles (bc, bs, for example) that interact at the B locus to create the brown phenotype, for simplicity, we use bb as the genotype of a brown dog. Additionally, some breeds refer to the brown phenotype as red, but genetically speaking, red is used for phaeomelanin and not eumelanin.

The D locus (MLPH) will determine if eumelanin in the coat, nose, paw pads, and eyes is “diluted” to blue or isabella. For dd dogs, noses can be any shade from light to deep charcoal grey, and their eyes can range from light brown, yellow, yellow-green, or grey.

What does the term isabella mean? It is a special term for dilute brown (bbdd). This is the color often associated with Weimaraners.

What Embark Reports for the S locus:

The S locus (MITF) controls where pigment is produced in a dog’s coat and skin. An insertion near the MITF gene turns off pigment production in the coat and skin, resulting in white hair and/or pink skin. Dogs with two copies of the insertion (sp) will likely have breed-dependent white patterning, with a nearly all white, parti, or piebald coat. Dogs with one copy of this variant will have more limited white spotting and may be considered flash, parti or piebald.

It is important to note that the MITF insertion variant does not explain all white spotting patterns in dogs, and other variants are currently being researched. For example, some dogs may have small amounts of white on their paws, chest, face, or tail regardless of their S Locus genotype. This is referred to as residual white. Dogs of some breeds are fixed for Irish spotting, a pattern of white undersides, often a white neck collar, and sometimes white facial markings. Research into the genetics of Irish spotting is ongoing.

You can read more about our S Locus test here: White Spotting Test Added to Embark for Breeders Product

What About Mate Selection and Expected Litter Coat Color?

When approaching coat color genotype to determine phenotype, it is best to go step by step with an individual dog, then create Punnett squares to visualize coat color genetics for a potential mating. A tutorial on Punnett squares can be found here: https://www.facebook.com/watch/?v=1394536040753193

What About Coat Color Loci or Alleles Not Mentioned Here?

There are other alleles at the E, B, and D loci that Embark does not currently report. Merle, saddle tan, harlequin, and albinism are beyond the scope of this article (but you can learn more about merle here), and greying/fading, urajiro, roaning, and ticking currently have no genetic tests available.

With every new version of our microarray, Embark works to expand our testing options. We proactively try to learn more about the genetics of coat color, and we have already discovered a variant causing blue eyes in Siberian Huskies. By uploading photos of your dog and filling out our research surveys, you are enabling Embark to better understand coat color genetics and offer additional  insights into the complex coat color traits that remain elusive but so interesting. 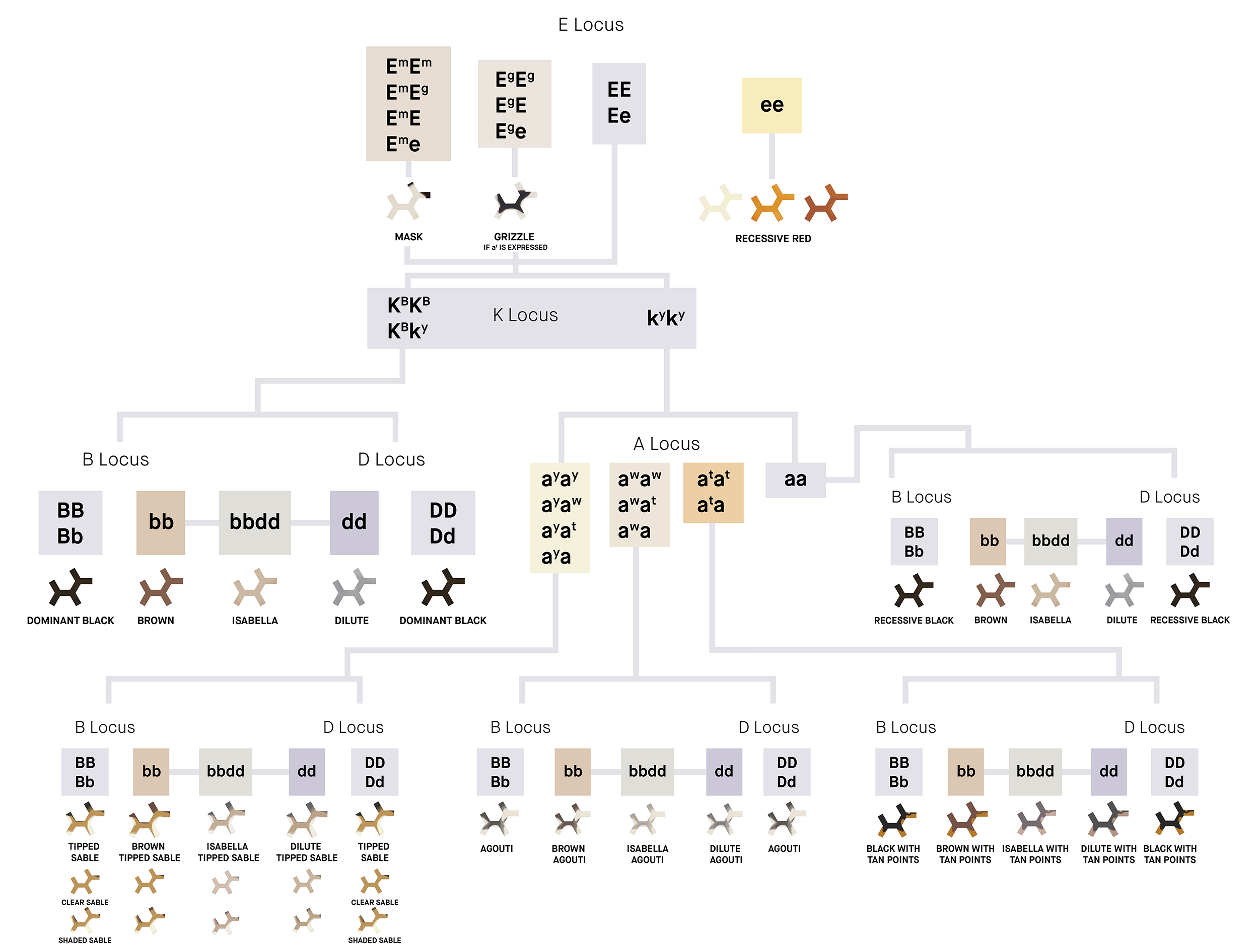 Back to other Coat Color Inheritance topics