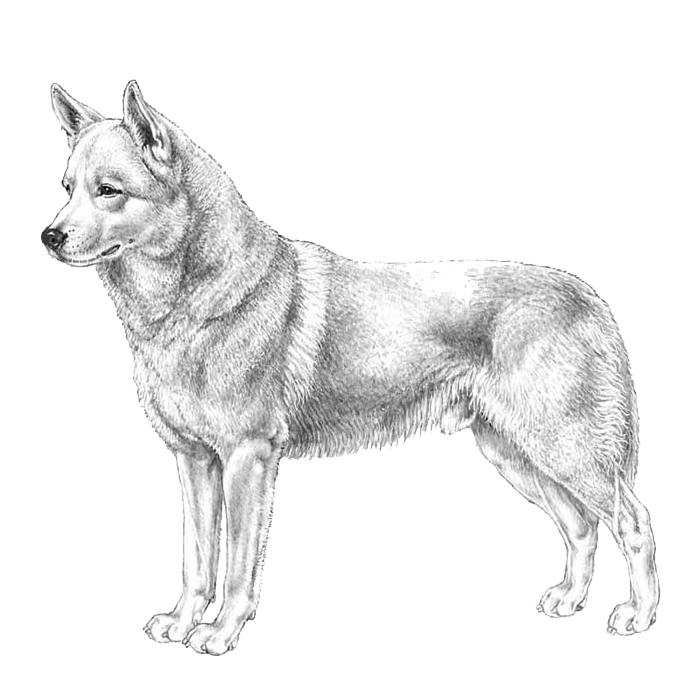 The Canaan Dog is a pariah dog that has survived in the desert region of Israel for thousands of years. Believed to be the dog breed that the Hebrews used in biblical times to herd and guard their flocks and encampments, some are still used by Bedouins and Druse for this purpose today. In Europe and North America they are companion dogs and compete in dog sports such as conformation, agility, and obedience.

The Canaan dog dates back to biblical times, originating in the land of Canaan.

Dogs were an elemental part of ancient Middle Eastern communities, where they were used to herd and guard the flocks of sheep that were a man’s wealth. Known as Kelef Kanani, Hebrew words meaning Canaan Dog, those primitive dogs survived for thousands of years, into the modern era, and still retain the traits that allowed them to live in harsh desert conditions. Today’s Canaan Dog has the same smooth coat, prick ears, and bushy tail as their ancestors, and no doubt the same alert, watchful, inquisitive nature that made him a well-regarded herding dog. This agile dog can change directions quickly and moves at a brisk trot, covering ground more rapidly than you can imagine.

Besides their pleasing form and graceful movement, the Canaan Dog is blessed with an endearing and responsive personality. Although their heritage of desert survival gives them a certain degree of independence, a Canaan Dog who’s been properly socialized loves their family and is adaptable to many living situations. Life in an apartment with several short daily walks is as agreeable to them as living in a suburban home with a yard and three noisy kids. While this breed is active, its energy level isn’t excessive. And the Canaan Dog’s territorial nature makes them unlikely to stray far from home, although, like any dog, they should be protected from traffic and other dangers by a fenced yard.

It’s also important to provide them with strong, firm leadership. A Canaan who decides they are in charge instead of you will make their own decisions about who is allowed onto their property, and this can lead to serious behavior problems.

The breed is an excellent and vocal watchdog, so be prepared for some barking. Canaans are keenly alert and will notice anything new or any new person on their property. They will bark to alert you to someone’s presence but will keep their distance, circling and hanging back while watching what is going on. This causes some people to consider them shy, but it’s their method of responding to new or potentially dangerous situations.

Canaan Dogs get along well with children, considering them part of their pack and treating them gently. They also do well with other small pets in the household that they are raised with, including cats.