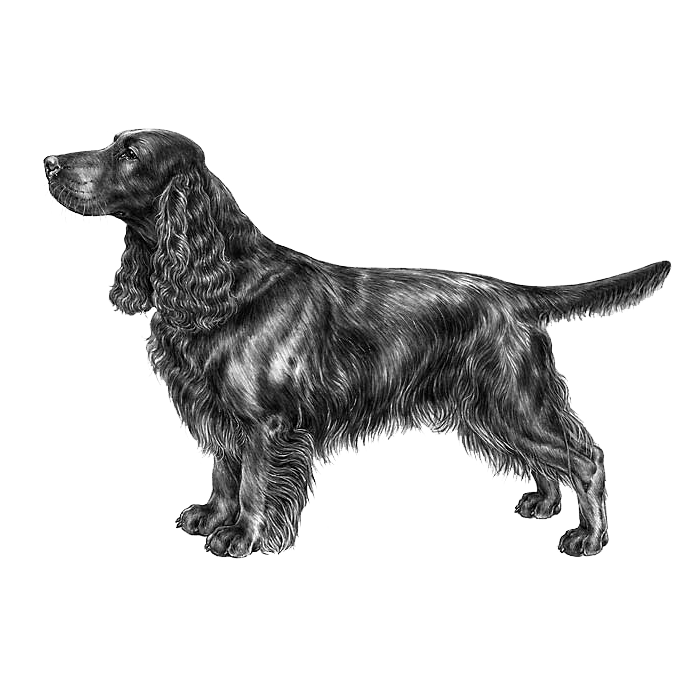 The Field Spaniel is a medium-sized breed dog of the spaniel type. They were originally developed to be all-black show dogs in the late 19th and early 20th centuries and were unpopular for work as a hunting dog. One of the rarest Spaniels outside of their native England, they are beautiful and soulful looking brown dogs.

Field Spaniels, one of the rarest Spaniels outside of their native England, are beautiful and soulful looking brown dogs.

Unlike most Spaniel breeds, Field Spaniels were not bred for the field despite their somewhat misleading name. Spaniel breeders were seeking to establish a solid black Spaniel line to be show dogs. As a result, they weren’t extremely popular as hunting dogs because their dark color made it hard for hunters to see them in the underbrush and fields. They much preferred dogs with brighter colors accented with splotches of white.

Field Spaniels actually predate their much more popular cousin, the Cocker Spaniel, and they probably had a hand in their origin. Even though they were used in the creation of other Spaniel dogs, they were unfortunately outpaced and are still extremely rare, even in the United Kingdom—by the late 2000s only 50 or so Field Spaniels were registered in the UK.

Field Spaniels, if people can manage to find them, make loving and affectionate family dogs. They are very attached to their owners and are gentle and sweet. They adore children and do well with other dogs and other household pets. They make the best companions when they are given other jobs to do, such as participating in dog sports or working in the field. If bored and left to their own devices, they can be exceptionally mischievous and will create their own entertainment. The same can be said about their living conditions. If exercised thoroughly, they can make very good city and apartment dogs, but of course they will thrive in a suburban or rural home. They tend to be a little calmer than other Spaniels, especially in the home.

There are Field Spaniel breeders in the United States, but because the breed is still so rare, prospective owners may have to add their name to a waiting list to get a puppy. However, if people do add a Field Spaniel to their home, they won’t regret it. These loving dogs make exceptional family pets and will reward owners with love and loyalty for their whole lives.