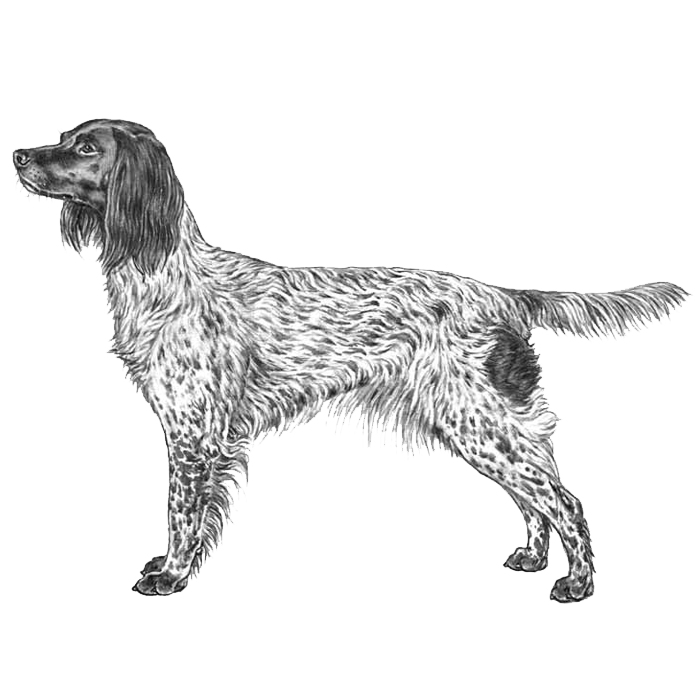 Because there are so few of them in the world—and because Small Munsterlander breeders are so careful about whom they allow to purchase their puppies—Small Munsterlanders have an unusually low rate of genetic illnesses.

Natives to Germany, Small Munsterlanders are very intelligent and trainable dogs. They were originally bred exclusively for German nobility, and commoners were not allowed to own them—they were highly prized and expensive hunting dogs. Small Munsterlanders are well known for their work with falconers, and they really only became available to the general population in the 1920s.

Small Munsterlanders can make good pets, provided they are given enough exercise and time outside; however, they are still primarily used for their original function: as exceptional and versatile hunting companions. Their biggest joy in life is pleasing their master, especially while hunting, and this eagerness to please makes them very trainable and biddable dogs. Because they are so smart and high-energy, lack of exercise and proper training can make Small Munsterlanders unhappy and may lead them to engage in unwanted behaviors (chewing, digging, hyperactivity, etc.). So wherever they live—and these dogs definitely do best in a rural home—they’ll need adequate exercise and mental stimulation.

Small Munsterlanders are truly people-loving dogs—they adore their family and are very good with children. If raised with smaller animals from puppyhood, they can coexist peacefully; however, Small Munsterlanders are still hunting dogs, and those instincts will always remain intact. Therefore, owners will need to supervise them with smaller mammals.

Small Munsterlanders are still not easy to find or particularly well known outside of Europe, or even outside of Germany. In North America, many breeders sell their dogs exclusively to hunting families. If prospective owners really have their heart set on Small Munsterlanders for pets, though, they will need to make sure they provide an active life with plenty of time outside.