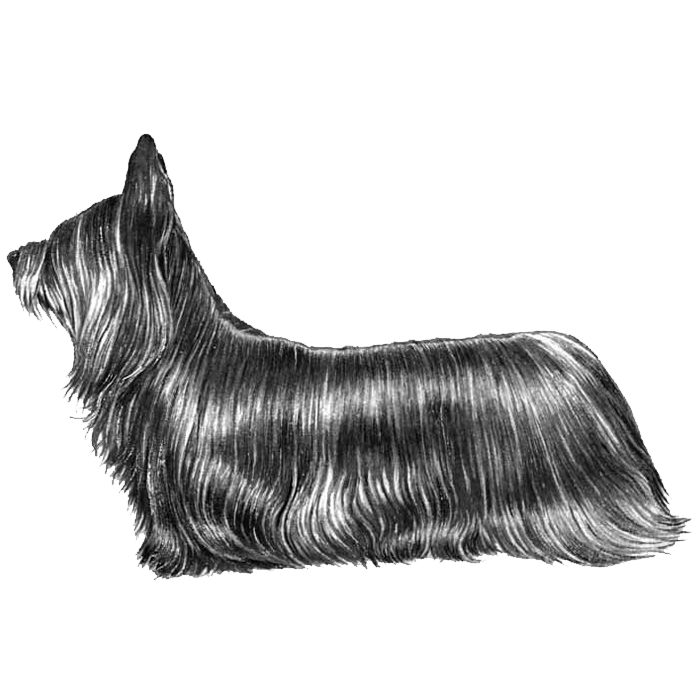 Originally kept as hunting dogs, Skye Terriers are now more commonly kept as companions, and prized for their loyalty and loving personalities.

Despite the various legends surrounding the Skye Terrier, tracing their actual ancestry is a little tricky as so many different breeds were called by the same name in the 1800’s.

How can we talk about Skye Terriers without telling the story of Greyfriars Bobby, perhaps the most famous Skye Terrier of all time? The legend goes like this: Bobby the Skye Terrier was owned by a man named John Gray, who worked and lived in Edinburgh, Scotland. Upon his death, he was buried in Greyfriars Kirkyard, a graveyard not far from where he lived. Bobby, his loyal and loving dog, spent the next 14 years sitting by his grave, never wandering too far, getting up only to find something to eat. When lovely Bobby died 1872, he was buried beside his beloved master, loyal to the end.

Little Bobby’s story is so well loved and so well known that there are statues of him all over Scotland, and his story has been made into movies and books.

Unfortunately for more modern day Skye Terriers, Greyfriars Bobby has done little to help their popularity and Skye Terriers are one of the rarest dog breeds in the world.

Originally bred as hunting dogs on the Isle of Skye in Scotland, Skye Terriers are now more commonly kept as pets. They were once the favored breed of the Scottish Aristocracy and Royal Family. In fact, legend has it that Mary, Queen of Scotts had a Skye Terrier that was so loyal that he stayed with her and hid under her petticoat during her execution.

Skye Terriers are friendly and intelligent dogs. They enjoy time outside but are mostly indoor dogs, which make them a great choice for apartment dwellers and city folk. They will also do well in the suburbs or the countryside, and are especially happy if allowed to roam around in a fenced in yard. They do well with other dogs and do not seem to suffer from that grandiose sense of self that many terriers do, and are sassy and intelligent without being aggressive. They can do well with children, especially if socialized with them from puppyhood.

Despite their rarity, Skye Terriers can definitely be found in the United States thanks to a group of dedicated and loving breeders. Because they are uncommon, be prepared to spend a bit more money on a Skye Terrier than on a more common breed, and keep in mind that there may be waiting lists for puppies. If you’re willing to put forth a little extra effort to welcome one of these exceptional dogs into your home, you wont regret it!