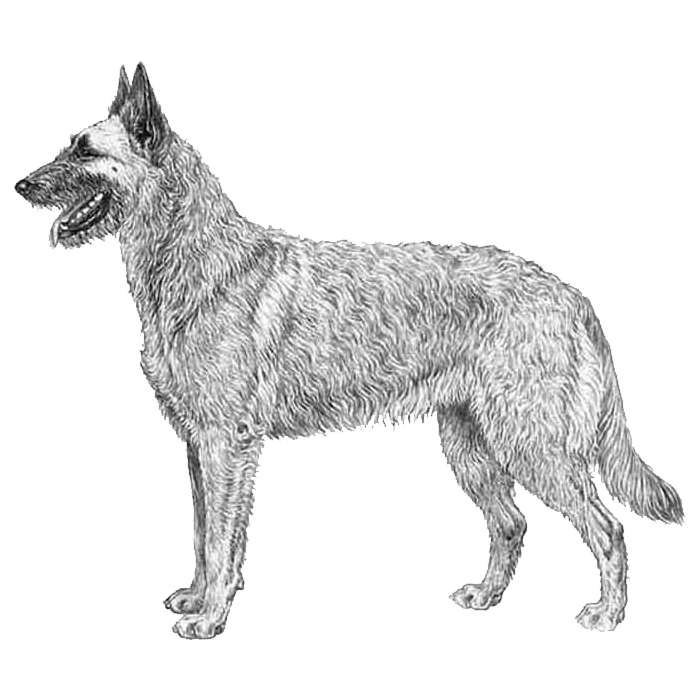 The rarest of the four types of Belgian Shepherds, the Belgian Laekenois is immediately recognizable by the harsh, tousled coat. Like the other Belgian variants, the Laekenois is an alert, hard-working dog with great loyalty and affection toward its people.

Despite being a multitalented dog who goes to war, guards royal sheep, and excels at sports, the Belgian Laekenois was used for another special task back in the day: they were trained to guard laundry as it was out hanging to dry!

Belgian Laekenois’ trace their history back to the Belgian Royal Family, where they were originally bred in the municipality of Laeken (in Brussels) to herd and protect the royal sheep. The Belgian Laekenois is one of a few similar Belgian shepherds- they are related to the Malinois, the Groenendael, and the Turveren, and are differentiated mostly by their different colors and coat textures.

In fact, there was some controversy as to whether or not these different coat colors and textures meant that they were all different breeds, or just different varieties of the same breed. Ultimately, they were declared separated breeds by the AKC, and Belgian Laekenois are the rarest of the Belgian shepherds.

Belgian Laekenois’ were bred to be herding and guard dogs and were relatively unknown outside of their native Belgium until the first World War, when they were used in battle (mostly as message carriers), and were frequently seen delivering small parcels and letters to and from the Red Cross. Extremely intelligent, the Belgian Laekenois’ also excel as obedience competitors and in all types of dog sports, particularly agility, tracking, and schutzhund.

As you’ve probably already guessed from this description, the Belgian Laekenois is not for the novice owner. Fiercely intelligent and loyal, they need early socialization and thorough training to make sure they don’t outsmart you (even though, honestly, they probably can). They do well with other dogs generally, especially when they are introduced to them as pups, and dote on children. Just as with any shepherd with a strong instinct to protect, Belgian Laekenois’ need to be taught to differentiate between friend and foe.

With proper training, Belgian Laekenois’ can learn to adapt to nearly any living situation. Because of their history as herding and sporting dogs and their size, they are generally not suited to apartment living, but can adapt if given enough time outside to run. They still excel as sheep dogs, so if you have sheep that need herding, this dog makes a super intelligent and loyal companion. If not, they still make a great pet for the owner who is willing to take the time to train such an intelligent animal.