Genetic Weight: Informed by Science, and You

Greetings, Embarkers! Isn’t it insane that we’re at the end of our first year? I am so excited to see what 2017 has to offer: I’d bet good dog biscuits that it involves a lot of canine genetics.

As 2016 comes to a close, I wanted to spend a bit of time discussing one of our features: genetic weight. We get a lot of questions about this: How do we arrive at your dog’s individual results? How come we get it wrong sometimes? Read on to learn more.

The reason dogs rule (from a genomicist’s point of view)

Sometimes I sit back and I think, “I am so lucky to be working with dogs.” First, because I get to cuddle dogs all the time. Second, because questions that have evaded human genomicists for years have come relatively easy (or easier, anyway) to dog genomicists. This is due to the incredible diversity and unique population structure of our domestic dog breeds. Taken verbatim from a colleague’s recent publication:

“…a total of 13 loci have been identified that significantly affect weight and/or height in dogs, six of which explain over 80% of the variation in body size in purebred dogs. In comparison, human height is associated with nearly 700 variants, which cumulatively explain only ~20% of the variation in adult stature.“

To sum up, we can explain over 80% of the variation within populations of purebred dogs with just six genetic variants. We can explain about 20% of the variation in human body size with about 700 genetic variants1. Moreover, the vast majority of the genes that have been associated with body size in the dog have been scientifically validated. Perhaps the most powerful demonstrations include mice deficient in these genes, as with GHR and IGF1. 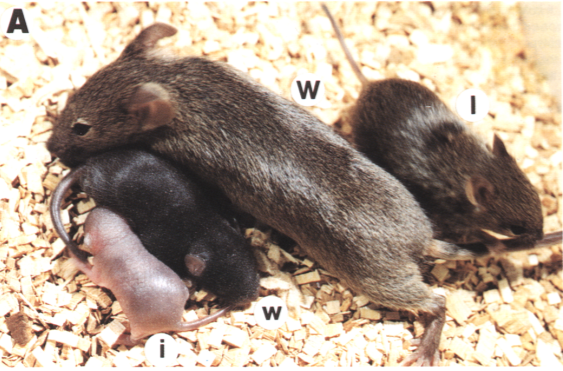 Mice that lack IgF1 are about 30% the size of normal littermates. As you can see above (mice labelled “I” and “i” are missing IgF1 with normal mice labelled “W” and “w” for comparison). In the dog world, a single IGF1 variant segregates in toy dog breeds.

Other size hits in dogs have been strongly correlated with body size in humans, such as HMGA2, and other species, such as LCORL in the horse.

Again, I am so lucky to be working with dogs.

Now, these variants are just DNA sequence, just a mutation like any other. Which means we can test for them just like any other mutation. By taking a subset of dogs with known body measurements and with genotype information at all of these variants, we generated a proprietary algorithm by which we can make a genetically informed prediction about the size of any dog. Then we started running your dogs! And this is how we arrive at predicted genetic weight.

Our algorithm works remarkably well. However, sometimes it gives predicted weights that are too big, or too small. For example, my own pup Shiloh is a healthy 70 pounds, way lighter than his predicted 95 pounds. Some of this is because our algorithm is based on the common genetic variants known to affect body size in multiple dog breeds. There are likely to be rare or breed-specific genetic variants that are important for particular dogs but that have not been identified…yet! With your input about our hits and misses with genetic weight, we’re going to be able to perfect our algorithm, and also identify new variants.

The other thing I want to point out is that while most of the time we’re right on the money, there are times that we’re going to be way off. This isn’t a fault of our algorithm, it is within the expected variation for a predictive model2.

So, what else is there besides genetics? Read on to find out what else affects body size in dogs.

Genetic variants are just the beginning

Besides genetics, the first thing to occur to folks is the effect of the environment on body size. We all know that malnutrition during times of development can have dramatic effects on your adult body size, weight, and metabolism. Malnutrition can affect you at any time from when you’re in utero or nursing through childhood; basically, whenever dogs (and humans!) are doing their most dramatic increases in size. As such, we cannot control for any runting or stunting that your pup might have experienced due a high litter number or malnutrition during puppyhood.

There is also a pesky genetic phenomenon known as epistasis. Life is made of feedback loops. The products of any given gene can not only affect the expression of the gene from whence it came. They can also mask or enhance the effects of another gene. Epistatic effects are at their most dramatic in mixed breed dogs. Unlike a purebred dog, mixed breed dogs have a relatively spotty (pun intended! coat color and patterning is a great example of epistasis). This improves our understanding of how the sequences from lots of contributing breeds will interact.

In addition, we cannot predict the effect of imprinted genes. Imprinting, you say? Not Konrad Lorenz and his imprinted goslings. No, this is genomic imprinting, an epigenetic3 phenomenon. We all have two copies of every gene, one from Mom and one from Dad. However, there is a small subset of genes (less than 2%) that is only ever expressed from one copy. The choice of that copy is dependent on the parent from which it was inherited. Interestingly, in support what biologists call “the conflict hypothesis,” many imprinted genes affect body size.

So what’s the conflict here? If you buy into the parental investment theory, it’s in Mom’s interest to evenly distribute her resources to her young: that way they all grow up and are healthy. As such, maternally imprinted genes tend to limit fetal growth. Thus allowing Mom to make sure all of her babies survive. Dad wants his young to be the strongest and largest, to best ensure his genetic information is passed on to yet another generation: as such, paternally imprinted genes tend to support increased fetal growth and resource use 4.

Back to body size

Okay, so now that you’re saying “wait but Erin what does this have to do with body size in the dog?” This means that the directionality of a hybrid cross matters. Will the puppies of a Cattle Dog dam to a Beagle sire, or a Beagle dam to a Cattle Dog sire, look different? I would say, most definitely. But I’m getting a PhD studying the molecular mechanisms of imprinting and am obviously a bit biased. But I think most scientists would say, almost definitely.

Finally, we can’t control for other epigenetic changes. “Uh oh,” you say, “there’s more stuff that affects the way genes can be expressed? Yes, epigenetics, which literally means “upon genetics,” can affect the way genes are expressed, not always in a parent-specific manner. Do these differ between dog breeds? Again, probably. Only recently has the field of epigenetics approached dogs as a model species, and we are already making discoveries. For example, a recent study demonstrates differences in the epigenetic state (as evidenced by DNA methylation) of the Monoamine Oxidase A gene across Beagles, German Shepherds, and Sapsaree Dogs. All of these breeds all behaviorally distinct. The authors argue this might be caused at least in part by methylation differences at MAOA. 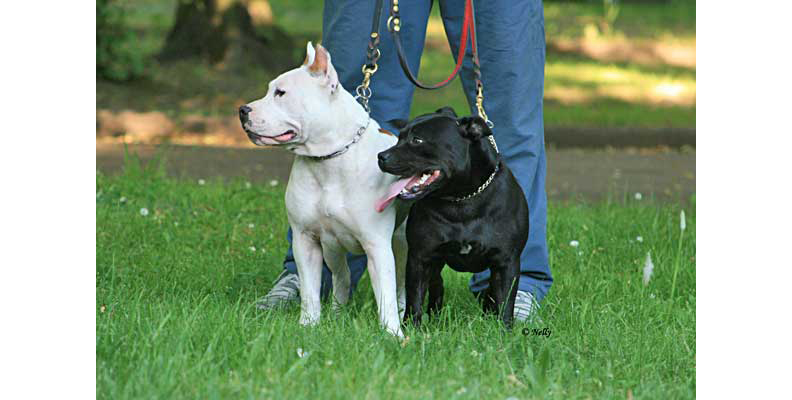 We haven’t tested the above two dogs. However, I think we can agree that they’d most likely land squarely in the Staffordshire Terrier Group. And yet their difference in size is considerable.

So this is what we can’t control for, and is probably why every once in a while we’re pretty off. But we’re going to get closer! With your feedback, we can not only identify new genetic variants. We can  also learn about other factors that affect body size. And remember, what we learn from dogs will inform studies on human development and disease processes. So thank you for all of your emails! We are lucky, lucky people to be working with dogs and their humans.